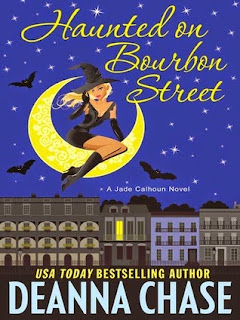 Jade is an empath and she just moved to New Orleans, a city known for its folklore of witches and vampires. Additionally, the house she rented happens to be haunted. I love these kinds of stories!
Apparently, her ghost is very erotic with the kinky dreams it gives her. I'd freak too with flying bottles swirling all around me. But what does the ghost want? Why is it attached to Jade? And that's when ghost hunters get involved.
Kane is hot and not what you would expect of a strip club owner. The two begin a rendezvous in the midst of this ghost expedition. Most of the time Jade is trying to make her sex dreams about Kane a reality.


Story is basically Ghostbusters meets the Dream Weaver. It does not follow the traditional formula of a witch's tale, which was a little disappointing to me. It's an odd tale of ghosts and sex.


If this was just a ghost story (ghost hunt), then why was there a picture of a witch on the cover? That's very misleading.