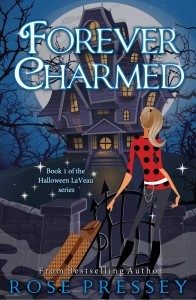 
One night, she finds an odd magical book of mystery in the scary attic of her dead aunt’s mansion. Are ghosts living in the manor? I certainly wouldn’t put it past it.


Suddenly, two handsome strangers appear at her front door. Who are they and why are they here? And why, for the love of god, do they hate each other?


A mystical mystery surrounds the plucky, quirky witch that can never do magic right. What do you expect when in high school you were named most likely to cause a disaster? Still, her witty naiveté is a charm.


Overall, this was a cool, bewitching read. I enjoyed trying to figure out the true motives behind the two men and the whole queen-of-the-underworld notion. Story was spellbinding up until 90% into the book when, at that point, the plot started to lose its pizzazz. The ending that finally presented the official showdown with Mara, the evil witch, was very anticlimactic.


Still, I love witch stories, and this was a pretty good one.

Posted by Sandra's Book Reviews at 7:35 AM