Review: OFF BOOK by Jessica Dall 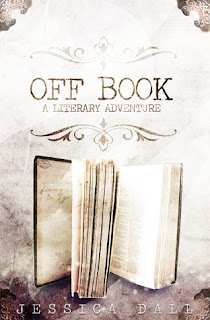 When you read a book, your main focus is typically on the story with the characters being pieces in this grand plot puzzle. Just like when watching a movie, you never think about the life that goes on behind the scenes with the actors, directors, casting crew, and all. Well, this book does!


Eloise is a fictional character (actor) awaiting her casting call in a story. While others are getting cast as wizards, spies, nymphs, vampires, Martians, cowboys, and whatnots in all sorts of novels, Eloise continually sits on the sidelines, taking useless classes on character development and generally what authors (directors) are looking for, feeling more and more discouraged. At her age, the chances of getting cast are only getting slimmer. If she doesn't get called soon, she will be a teacher ("Those who can't do, teach!") and fade away, forgotten.


I was intrigued by this unconventional story. It's a behind-the-manuscript documentation, detailing the tasks and efforts in the making of a novel. I liked it!


Right off the bat, you root for Eloise and hope she gets a part. Then she does get a part--a part as a recorder, a part of the stage crew. "Now she wasn’t teaching people who were going to go off and have lives. She was watching people who already had lives in progress." (22) Kind of a bummer, especially knowing that most of your co-workers are "post-stories" (people that have been in stories and are now working behind-the-scenes.) Of course, one of which is a former and starred in an erotic romance novel. Nice!  Barnaby is a charismatic British stallion that sees something in Eloise, who flushes whenever he's around.


"We are all tools authors use to perfect their art. They make us wait around for months, years, picking us up, killing us off all for the purpose of getting their story told. And we have to put up with it because our entire existence is based on them giving us a story. We have no free will. Either you give yourself over and let those people do whatever the hell they want to do to you, or you’re stuck in that damn School left to fade away. If they want to break us, bash our heads in, slowly flay us alive, we just have to take it. It’s like .. . I don’t know. Mind rape. Life rape.” (34)


But Eloise didn't want to be "just another character sacrificed in the name of the plot." (53) Then, suddenly, she accidentally finds herself in a story--a strange, medieval-fantasy hybrid story. At this point, we cross back and forth between the story and the story within the story, all spliced with dialogue and a fleeting narrative.


Frankly, I wasn't so interested in the story Eloise found herself in. It sounded like she was in a world where King Arthur meets Robin Hood or Harry Potter or something. Regardless, I did want to know how it would turn out for her. Could she be trapped? And would it be the absolute worst thing if she were to stay? Did she break some sort of cosmic rule by falling into a story? I actually thought that Eloise was going to take initiative and write her own story.


It's funny because Eloise being trapped in the story made me think of those Bugs Bunny episodes, ones that had him arguing with the cartoonist over silly things like forgetting to draw his ears. In this case, Eloise would converse with the author, pleading for assistance. I thought that was kind of weird and the interplay would be confusing at times.


I was more fascinated by the concept and how it all began rather than the quandary, which is where the story started losing me. From that point on, I was mainly just muddling through it. And even though I didn't really know how Eloise ended up where she did or why Barnaby needed to go through the endless tedium of going through proper channels and procedures, I still kind of wondered how this would end.