Review: MOM ON THE ROAD by Allyson Ochs Primack 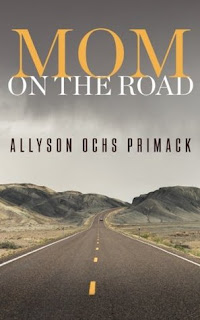 "I was never supposed to get old. It was not part of the plan. As a child, I thought that old age was something that only happened to other people." (10)


Before anyone knew it, it happened to Maggie. She got old, and being a mom just made her seem older. Funny thing was that it wasn't how she felt on the inside. "On the outside, I look like a lady, a woman. Someone whom waiters and store clerks call "ma'am." But inside of me lives a little girl who feels like all of this is a big, fat joke." (17) I think most of us feel that way.


As she reminisced about her childhood, the lyrics to Archie Bunker's "Those Were the Days" played in my head. Whatever happened to those days?


"I lived in my own head. My entertainment was my own imagination. I was the most content in my own world." (25)


I loved that Maggie's life revolved around the popular culture of the 70's, 80's, and 90's. In every stage of her life, she could always turn to a TV show or a song to learn from and find enjoyment. But what once made her happy soon scared the living crap out of her when she became a mom. Suddenly the only stars were murderers, rapists, terrorists, and kidnappers. I think she might be right: There is too much information today.


What starts off as an interesting reads eventually turns into a Mom Guide with talk about pregnancy weight, breast-feeding, PTA committees, soccer practice, and on and on. Oy, what a drag! Yeah, I really didn't need to hear so much about the kids. When was she hitting the road already?


"Mom on the Road" doesn't actually take off until one of her kids goes on tour for an acting thing. It's not the "Mom Takes a Break" notion I had originally perceived. So Maggie was basically a Stage Mom.


Witty and relatable for the most part, the story shared some colorful anecdotes about marriage and motherhood, but it wasn't quite what I was expecting. I liked how it started off with the timeline of Maggie's life (childhood, adolescence, college phase, adulthood) and how that all changed when she became a mom. I thought this would be a story of longing and regret, which would perpetuate a series of amusing antics for this 40-year old mom. I mean, Maggie talked so much about being free and never growing old that it seemed she was going to cut loose and run wild. That's the direction I thought we were heading. In actuality, this is just a case of a mom on the road...with kids. I don't really think traveling with kids would be much fun. And that basically deflated the story for me. I'm sure a lot of moms would like it, but, for me, being a single gal and all, it was just okay.