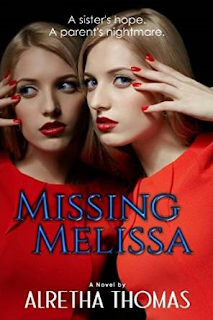 Something is missing in Maddie's life--her twin sister, Melissa. Many have given up the search on the disappearance of a 3-year old, but not Maddie. Nineteen years later, she believes her sister is still alive.


Driven by instinct and on a mission, Maddie re-opens the investigation, recalling any memory and chasing every lead. Will she be able to find her? At first, she didn't have much to go on. She had a dream of her sister stating she wasn't dead and coaxes her to find her? Doubtful. But then again, don't twins have that special bond?


Story had a slow start, but a curiosity urged me to continue, especially when it seemed like the parents may not be entirely truthful. It becomes more and more intriguing as dark secrets are revealed.


Maddie should be focusing on her new job, her new life, her new "normal." “But ‘normal’ is a setting on a washing machine and not what our lives are supposed to be." (98)


While you feel that Maddie putting herself out there in this search is naive and dangerous, you still can't help but admire her bold and fierce tenacity.


Perhaps a little more suspense might've made it more compelling, but, in the end, this story turns into a soulful and engaging read!