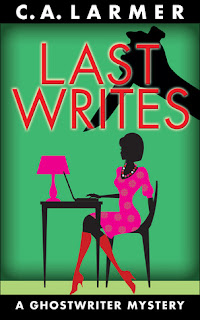 This book sounded better than the last book, which was a real snoozer. I had hoped it would be better and it was!


Someone is killing off best-selling authors. Oooh, intrigue! “Murder is one consistency you can count on.” (LOC 307)


Roxy’s obsession with death makes her a good sleuth. The murders were interesting and compelling. You just had to find out who was killing off all these writers.


I also liked how this book brought back a lot of the old characters from Book 1, like Oliver, the surly agent, and Max, the adoring long-lost friend. If these characters had been in the second book, it might’ve been better, almost average even. But this book was the best one yet! In fact, this probably should’ve led off the Ghostwriter series.


Another fascinating aspect was the love triangle between Roxy, David, and Max. Who should she choose? I like them both. Of course, the greatest twist was when Oliver is the prime suspect in these murders. How will Roxy solve this one? And will she solve it before becoming the next victim?


The best one ever!

Posted by Sandra's Book Reviews at 8:05 AM