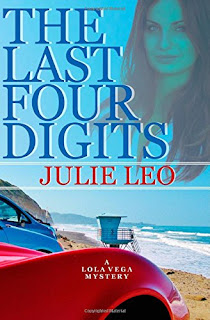 Suicide or Murder? Who or what killed the movie star, Jack Stone? That's what Lola Vega is trying to figure out in hopes of getting a generous settlement to make this month's rent. But this case may not be so easy to crack because, to add another strange twist, it seems Jack Stone may have been involved in the practices of séances and witchcraft. It would seem that he's been trying to find his sister's killer. Fascinating.


At first, it would appear that Lola is just another amateur sleuth, but she is actually a bright and tenacious little cookie. Even when it seems that the person who hired her may have written her a bad check and someone might want her dead, she still keeps herself on the case, going through great lengths and even greater distances (Mexico, for god sakes!) We definitely need more stories of smart, brave Latinas.


But what was the significance behind those last four digits--those four random numbers? That was a head-scratcher.


Why were the bodies suddenly piling up? Was Lola being charged with murder? What the heck did the circus have to do with any of this? And, more importantly, who was behind all this? Gripping and engaging, this is a mystery that keeps on getting better and better. Just when you think you have it figured out, a new clue pops up. Inching closer and closer to the truth, you just have to see how it all ends.