Review: GONE FOR YOU by Jayne Frost 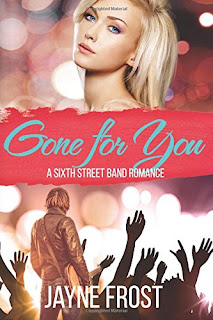 Cameron Knight is a musician from an up-and-coming band with most of its members embellishing the punk rock n' roller persona.


I became slightly piqued by Cameron's courtship of Lily, the event coordinator at one of the hotels that they stay. The fact that Cameron is part of a popular band means that he can nail any girl he wants--any girl, anywhere, anytime. So why is he after sweet Lily, the quiet and hardworking artist, who just doesn't seem like his type? Maybe because she was more of a conquest. Game on, right?


Propelled by witty and somewhat boorish remarks, story generates a competition of gratuitous bravado. But then what starts off as a game--as a one-night stand full of hot passion--quickly becomes a complicated mess in the throes of a band's fame and superficiality. Can romance survive the tight booking schedules, the endless tour dates, and the flashing lights of paparazzi?


For me, the life of a rock star is not as glamorous with the wild partying, the booze, and the loose women. In fact, I'd find it a little boring. Additionally, the "relationship" between Cameron and Lily was not that genuine or believable. How can you deem someone "special" within 2 seconds of meeting them? And for a rock star to put his fame on the back burner just to fit into her world? C'mon! Maybe if we had gotten Lily's perspective we might've figured out the reasoning behind this whole hook-up. But the fact that it was strictly told from Cameron's point of view indicates that this was an unbridled infatuation--it was just sex. It was kind of hard to take it serious.


With a few exciting moments here and there, this was an average, mildly trivial romance with a fleeting pace.