Review: THE TRUTH ABOUT EMILY by Madi Brown 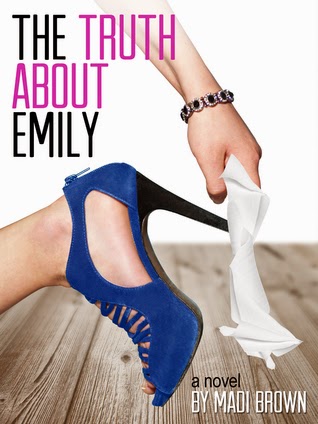 29-year-old Emily Greene looks the part, but she’s still working on becoming a modern-day woman. Not that she’s one to back down from a challenge, but living as an eternal work-in-progress wasn’t exactly the goal that she had in mind. It’s a harsh but true realization---the idea that that time isn't on her side, and the notion that wanting to have it all, doesn't mean getting it. The verdict is in; with zero prospects for a relationship and a stalled blogging career, Emily has every reason to believe that she’s been living a life too humdrum for her own good.

Making the change won’t be easy. She’ll have to do whatever it takes; start dating like a man, become more selective about which rsvp’s she accepts, and work even harder at getting her dream job.The payoff’s huge;a modern twist on a storybook ending, but gains don’t often come without risks. In the here and now Emily just may be forced to choose….It’s got to be one or the other----the profession that she’s always wanted, or the love that she’s never had.


My thoughts: Right off the bat, Emily is one fast-moving, fast-talking broad living the New York life in designer wear—wears that I didn’t know and couldn’t recognize.


“As a teen, she’d always journaled. Reading her coming-of-age entries aloud to her friends somehow became a regular past-time, which resulted in them being completely entertained. They’d laugh, they’d cry, and yep, the reviews were better than a Broadway musical; but writing professionally? That had been nothing more than a dream. Her father had mentally shaken her awake from that one on more instances than she could name. “Becoming a writer isn’t realistic. It’s not going to pay the bills. It’s a hobby,” he’d declare.” (15) Being a fashion writer ain’t too shabby.


But, most importantly, Emily always tries to follow her lists.


What I liked best about Emily was that she was an independent gal trying to follow her dreams, even if that seemed to be making jewelry for haughty celebrities. Still, Emily struck me as a superficial and shallow character, one that contemplates her world with the language of chic and fancy living—in fact, she kind of reminded me of Cher from Clueless.  As if! (Not my favorite movie really.)


I found some of her conversations to be monotonous and superfluous. So you’ve decided to go vegan. Who cares? And must it be necessary to make appearances at all these birthdays, baby showers, engagements, and anniversary parties, which prompt her to buy gifts from Lame R’ Us? No wonder Emily craves the high-society life.


Additionally, her views on dating and relationships were somewhat vapid.


The whole time I wondered: What was the deal with Emily? What was the point of her story? I couldn’t figure it out. Based on the summary, I expected something else from the book—something more aspiring and meaningful.


Overall, this was a lackluster read. I just couldn’t get into it.