Reader, beware, you choose the scare. 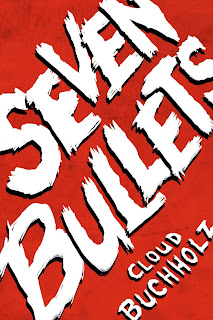 One of my favorite series when growing up was the Goosebump series by R.L. Stine, particularly the ones the reader got to choose the adventures on. That’s why I was more than eager to read Seven Bullets by Cloud Buchholz, another make-your-own-adventure story.


In this tale, I am a skilled assassin ready to retire until they kidnap my little sister. Will I make the right choices to get her back?


In the beginning, my first instinct to get that gun away from my face was to drop-kick that S.O.B. After all, I’m a skilled assassin. Why wouldn’t I know some kick-ass karate? Of course, that proved to be successful.


But, of course, I’ve always been the kind of person to utilize intelligence more than physical confrontation, so I played this first round behind the scenes rather than on the battlefield. Unfortunately, my little plan got me into some hot water—or maybe hot lava, I don’t know. One minute, I’m in this creepy cave, and the next, I’m in a kitchen with a creepy guy who jams a knife down his throat. What!?


The plot was dubiously complex. It wouldn’t make sense sometimes. Was this fantasy or adventure? Somehow I ended up in psycho Wonderland, where the path I trudged mysteriously disappeared. In fact, it would seem that every time you died, you ended up in Hell. And if I stayed alive, I’d be dodging an army of bullets, which was almost surreal.


One thing that was admirable was the main character’s (me) tenacious determination of not giving up, which is pretty much how I generally am.


The choices were also very brief—there wasn’t much story to dive into. However, some of them were challenging, causing you to really think about it. After all, you do want to come out of this alive, right? Also, the small paragraphs did have a douse of humorous quips sprinkled here and there, which made it a little more enjoyable.


Of course, what I liked best about this book were the endless adventures. You just never knew what kind of mess you were going to get yourself into; and it was a lot of fun trying to figure a way out of it. The good thing about a choose-your-own-adventure book is that you can go back and play again. I felt like a kid again! On the other hand, you can only re-read the book so many times before repeating the same choices and scenarios.

FYI: I won the first round!