Review: THE FIRE by John Heldt 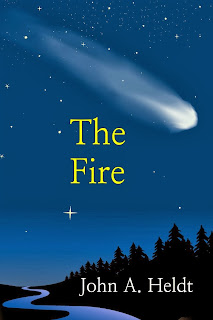 This is the third John Heldt novel that I’ve read. The Fire is the sequel to The Mine and The Journey.


Our hero, Joel Smith, from The Mine returns as a geology professor to Kevin Johnson, an upcoming college graduate.


Being that it was his last summer before grad school, Kevin takes a mini vacation with his family (his mother being Shelly Preston from The Journey) touring an old city that was destroyed by a fire over a hundred years ago. Then, one night, Kevin discovered something that might allude to the possibility of time travel. “As a man of science, he felt compelled to dismiss the idea immediately. Time travel was impossible.” (17)


An intellectual curiosity compelled him to seek out the old shed in the back, a portal that somehow sent him to 1910, the year of the fire. That’s like going back to the day the Titanic sank.


It was odd that Kevin could step back into his own time—something that our earlier heroes could not do. But who could pass up an opportunity to experience another time? Certainly not Kevin, that’s for sure! He just had to go back to find the girl with “the Jane Seymour face and Gibson-girl hair.” (42)


Kevin was a smart, kind, and charismatic character. He seemed to have a chivalry complex when it came to how girls were treated in 1910—he couldn’t stand that Sadie worked in a brothel, he hated the heartless brute that courted Sarah, and he expressed disappointment on how the bright female students in his science class were programmed to think that their years were chained to household and family duties. Still, being caught between the affection of two lovely ladies is never a good place to be in.


Then there was the inevitable fire. “Would [he] ride through Wallace like a turn-of-the-century Paul Revere and warn residents that the fires were coming? Or would [he] let history run its course and let people die?” (177) Kevin must make some hard choices—some hard, life-threatening choices.


Filled with scrupulous, historical detail, this book is just another top notch in Heldt’s finely crafted belt. Readers will enjoy another time-traveling adventure filled with drama and romance. Well-written and entertaining!