I have left Rome and got on a plane, where I spent a dozen hours flying across the ocean. The food was terrible--it was right along the same levels as hospital food with its mushy texture and synthetic quality. It might as well have been a Cup O' Noodles. Actually, a Cup O' Noodles would have been preferable. The last thing they served us was a pasta al pesto, which was this crinkly pasta with dry, green sauce. I had taken two bites before shoving that tin tray aside in mild repugnance.

With only a few more hours of flight time, I sat there with an empty stomach, crushed within the tight enclosure of the surrounding passengers. My back was aching and my legs were cramped. I eagerly watched the monitor above as the tiny plane image drew closer and closer to the L.A. star. When was this freaking plane going to land?

Then the seat belt sign lit up, which meant we were going to land soon. Oh, thank god!

Once the nose dipped and the plane began its descend, my organs practically shot up and whirled inside my head. The air was thin, and nausea began to take its toll. Whoa, where's the barf bag? I wondered.

Down and down we went until finally we landed on solid ground. I clapped and cheered knowing that I was out of the air and on U.S. soil. I jolted out of my seat, awaiting the crew to open those doors. Once they gave us the go-ahead, I immediately got my bag and was out of there.

After taking in a few breaths, I walked through the narrow passageways to get to security check and baggage claim. It was quite a trip in itself. When I got there, there were loads of people wanting to get into the country. My goodness!

I waited in line for about 30-40 minutes, it seemed. My security officer was this young, rugged, handsome guy with a tattoo on his bicep. Hubba-hubba! He asked me all kinds of questions, like if I was traveling alone and if I had brought back any alcohol. By the time we had completed the process, he ended it by returning my passport and saying, "Welcome back."

A wind of relief swept over me as I walked away with my arms stretched out to the side and my head tilted upward, thinking, "Yes, I'm back, California--my wonderful home!" I almost felt like hugging and kissing the ground, but I was way too exhausted. 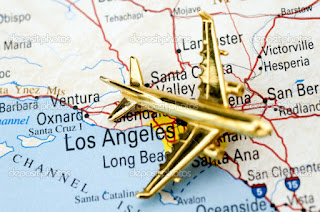 Posted by Sandra's Book Reviews at 9:04 AM