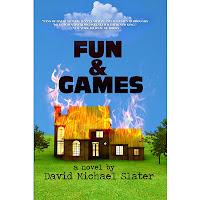 "When opportunity has knockers," then it's a definitive chance to read this book. (6)


Jake, Cory, Milo, and Jonathan were all unruly, young boys that are reminiscent of The Sandlot kids―funny, charismatic, and just plain curious about girls.


Explicitly told from the memory of Jonathan, this colorful tale relays the simple ups and downs of a boy's coming-of-age process while sulking in the battling throes of Judaism between his narrow-minded father and tenacious rabbi. Why was there so much talk on this religion? It was a tad uninteresting at times. Although I was a bit amused when the dad stated to the rabbi that he was "naked" beneath the clothing of his religion. Wow, what a fascinating zinger! Still, this did not seem to faze Jonathan, who wanted nothing more than to score high on a Purity Test―a secret game he had concocted with his friends.  However, the Jewish theme still managed to play an important role in Jonathan's "game," like the dybbuk―"an evil, wandering spirit in Jewish folklore"―that seemed to possess his family. (85) It seemed that Jonathan was the only sane one in the bunch.

While dealing with the oddballs of his life and all the secrets that stumble out of the family closet, Jonathan tries to grapple with his growing pains and a search for his own identity. His is a story that takes him through the zany hurdles of high school all the way to college, where he meets this kooky professor that dissects the word "cat" on the first day. Weird, huh? But then again it was college, where beer bongs and promiscuity were plentiful.

Religion played a major role in this book―all the emotion and drama seemed to stem from it.  Truth be told, I am not all that into religion and I am certainly not moved by it; however, I was pleased to find out that lurking beneath all that God talk, there was an actual story there, one that was engaging enough to hold my attention. The funniest pun you can think of as you read this is: Boys will be boys (which means they'll basically act like idiots.) But what I liked best about these boys was how they looked out for each other through the good, bad, and remorseful. Still, you can't help but think what a bunch of cry-babies they were at times. I also found the tangled mess in the end to be confusing (I actually had to re-read a couple of parts to fully understand.) On a final note, the book could've used some more editing. Overall, I'd say it was a light and enjoyable read.
Posted by Sandra's Book Reviews at 9:04 AM