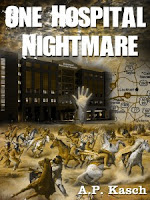 The story: Something just isn’t right at Battlefield Memorial Hospital. Nick Moore, a sensible middle-aged man from Eastern Texas, must admit that his best friend Jared might not be losing his marbles after all. By an eerie twist of fate, both of them end up in this same out-of-the-way hospital at the same time. Nick soon learns that Jared’s irrational, terrified rants about the place don’t tell the half of it.

The year is 2010 when Nick is checks in, but at this hospital, time doesn’t seem to cooperate and the line between nightmare and reality starts to become blurry. Somehow, Nick becomes involved in a famous local Comanche Indian fight from the year 1840. As the mystery unfolds, his values are tested and keeping his sanity becomes more important than his physical healing.

Hospital mystery meets historical fiction in this somewhat humorous, often suspenseful PG-rated novella. It has been specially formatted for all Kindle devices, so we can promise you a smooth, enjoyable electronic reading experience. Download One Hospital Nightmare today and get ready for one wild ride.

My thoughts: It all started out with Jared in the hospital. Fingers coming out of walls and demonic clocks were all the things he was seeing—right after the surgery. Was it the drugs they had him on? Was it a medical conspiracy? Or was it just the mere paranoia of being enclosed within the hospital walls? At first, you’re really not sure what’s going on.


Then a car accident sends his best friend, Nick, to the same hospital Jared was in. Strange things begin to evolve, leading Nick to a blind stupor and erratic paranoia. Were they illusions? Were they dreams? Or were they real? But what did the Indians have to do with any of it?

Curiosity compells the reader to find the answer, however, confusion follows every step of the way.
Some scenes, like Nick shopping for flea spray, were a tad mundane and long-winded.


Overall, the story was well-written, but I felt that it wasn’t interesting enough and often found myself seeking the point of it all.  What should have started off as a horror story ended up being almost like a history lesson, which is a plus for all those who enjoy hearing tales of cowboys and Indians. It seemed to me that the whole thing was just one puzzling illusion after another. By the end, we find out why.


The book was short and quick, and there was a clear indication of the author’s delight in it. I must admit that that was what I enjoyed most of all.
Posted by Sandra's Book Reviews at 8:49 AM