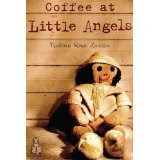 Phillip, Sarah, Kaitlyn, Caleb, Maxine, Grant, Melanie and Josh grew up in a small town where they spent their high school years together as an inseparable clique. But high school has ended, and they are all living their own “grown up” lives, each under the impression that their group has basically come to an end. When Phillip dies in a hit and run accident, Kaitlyn summons the others to all come back home, forcing a reunion that no one is particularly interested in partaking in.

My thoughts: It begins with a small forward by Phillip as he relays about the things he used to do when he was alive. The reader is then introduced to Maxine, a no-nonsense, fearless woman who doesn’t like to show emotion—bad or good. Next, we meet Josh, a divorce lawyer with a loony secretary; then came Sarah, the old high school girlfriend still holding on to an un-proclaimed love; then Kaitlin, the one who runs Little Angels coffee shop; then Grant, the prankster; then Melanie, the boy-lover; and finally, Caleb, Sarah’s first crush and, apparently, the one that brought together this group of high school friends, friends that stayed together all four years and then parted ways in the end. The heartbreaking news of Phillip’s sudden death is what reawakens their past and triggers a long-awaited reunion.

I liked how this book doesn’t really have chapters; it has sections that allow the reader to enter the mind of each character, all of which have their own individual story that they are narrating in their own voice. The characters are distinguished by their livelihoods, morals, and personal issues, and it is the distinct memories of their past that meld them together in a unified abstract form.

Each character was enjoyable in their way, but I must say that I liked Maxine the best simply because I related to her most. She keeps the dating scene real. She’s not into the whole “love is a fairy tale” thing. The problem was that she was dating Prince Charming, a nice guy that liked to give her massages and flowers, and liked to talk about feelings and watch romantic comedies, and always remembered an anniversary, even if it was only 3 weeks old; he was the type of guy that never forgot to end his sentences with an “I love you,” and he absolutely adored the idea of marriage and children. Can you say, Gag!? I know there are probably a lot of women who would love a guy like this. But, in the words of Maxine, “On paper, he’s perfect. In reality, I’ve almost forgotten what it’s like to breathe…” (pg 58) Unfortunately, perfection can be boring, and, let’s face it, it can make you want to stick a fork in your eye. To me, that whole “perfect boyfriend” charade is phony and superficial. It’s like having a Ken doll around, in which he is nothing but a plastic head completely devoid of male genitalia. I’m sorry, but I’m with Max: I want a guy that I can be a bitch with.

At first, the writing style grabs your interest as if you were talking to an old friend in a coffee shop, which I’m sure is the reason the book got its title; however, at the same time, my efforts were waned by the monotonous flow of the story. I felt that the author needed to mix up the pace a little using the old “Show, Don’t Tell” rule. But since I was a reader that often likes to see a story to the end, I continued reading, at times skipping some of the superfluous details.

It’s a quick read that makes you ponder what it would be like to reunite with someone you haven’t known in so long. The words dread, regret, and sheer awkwardness would sum it up quite nicely, and they certainly all come into play when these old friends come together again. And although tedious at times, I still could not help but wonder how this reunion would turn out, especially since these friends were all involved with each other in some way. I thought it would be like reading an episode of Beverly Hills, 90210, where guy A breaks up with girl A to go out with girl B after cheating on girl A, who cheated on guy A with guy B yadda-yadda-yadda. But the story takes on a deeper meaning as each character reflects on their memories of growing up in that coffee shop, and everything else sort of “comes out” in that coffee shop. Eventually you start to feel like a psychiatrist to this group because of the constant exchange of emotions, which I found a bit wearing.

Overall, I’d say this book was okay but just not particularly tailored to my niche.
Posted by Sandra's Book Reviews at 4:47 PM