I know it's been like a month since I've done any book reviews. June has been especially hectic for me, and it is only because of the 4th of July holiday that I was able to finish my latest read. Of course, I would've been done sooner had it not been in PDF format. You know how it is when you've been working all day at a computer in the office, and the last thing you want to do when you get home is get back on the computer? Oy, vey!

Usually, I don't take E-books, but I thought I'd make an exception this once for The Undertaker by William F. Brown. 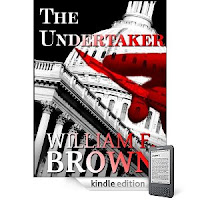 Pete Talbott is a California native and harried Boston computer wonk still grieving over the death of his wife Terri, when he found himself at the wrong end of Gino Parini's .45 reading his own obituary torn from that morning's newspaper. Talbott figured it was all a big mistake until Parini showed him his wife's obituary too, and this was a mystery Talbott couldn't leave alone. From a funeral home in Indiana, to car chases on the Dan Ryan, a bloody Back Bay townhouse, snipers in New York City's Washington Square, sleazy lawyers, corrupt County sheriffs, mafia hit men, the FBI, an army of Chicago cops, and that unforgettable scene in the upper berth of an Amtrak Train, "The Undertaker" is a thrill ride with a touch of humor and romance. Someone with a penchant for sharp scalpels and embalming tables is planting bodies under other people's names; and if Talbott doesn't stop them, he and his quirky new girlfriend, Sandy Kasmarek, will be next on the Undertaker's list.


My thoughts: It all began with a naked, fat man being tortured. The writer really tries to paint this scene for you as if you were watching some Mission Impossible movie. I found a few typos here and there before I ever got to the first chapter, which were a little distracting but not enough to completely deviate from the scene.

I liked the way chapter one began with the main character, Peter Talbott, reading his obituary in the newspaper—a real attention-grabber, if you ask me. At this point, I’m wondering how a man could be reading his own death announcement. Was it a conspiracy? Does he have a twin? What? Then Peter begins to tell his life story, which consisted of where he graduated and where he worked—all details that were a little mundane but were quickly revived by the author’s “cynical, black humor.” (pg. 16) Then it turns out that Peter has had quite a few death announcements. Confused, he embarks on a journey to find some answers, starting with attending his funeral scheduled the next morning.

Suddenly, this mistaken death becomes an obsession for Peter, and an investigation takes place. It was clear that Peter was no detective and had absolutely no idea what he was doing, which made for some pretty tedious reading; but his tentative efforts somehow drives you keep going. I thought it was endearing how a man could still be faithful to his wife even in death. Peter could not allow his wife’s name to be dragged through the mud. His philosophy was: “I don’t care what they say about me, just leave her out of it.” Very chivalrous. He was kind of like a middle-aged knight at the defense of his great lady’s honor.

This is a story of one man’s mission to seek the truth about a mystery death and clear his and his wife’s name. And, since it was written in first person perspective, we know all his thoughts, questions, theories, and epiphanies—basically, his amateur approach to this case. It’s no Sherlock Holmes, but it definitely makes you curious. I may not look at another obituary the same again.

For more information, log on to
http://billbrownwritesnovels.wordpress.com/
Posted by Sandra's Book Reviews at 9:04 AM