Tour for "Bernardo and the Virgin" by Silvio Sirrias

When Latino author, Silvio Sirrias, asked me if I wanted to be part of his upcoming tour for his first book, "Bernardo and the Virgin," I immediately accepted! His other book, "Meet me under the Ceiba," was a throughly enjoyable read that had mystery, romance, and terror! It was intriguing how it read as both a story and a journal. Plus, you had the soulful words of Mr. Sirria's heart and soul mixed in, so, yeah, that made for a thrilling read. I was almost sad to finish it.

But it is a great honor to have Mr. Sirrias re-visit this blog. Here is an essay by him.

The Benign Demon that Fuels Me
By Silvio Sirias

All writers are vain, selfish, and lazy, and at the very bottom of their motives there lies a mystery. Writing a book is a horrible, exhausting struggle, like a long bout of some painful illness. One would never undertake such a thing if one were not driven on by some demon whom one can neither resist nor understand.
George Orwell, “On Why I Write”

Just last week, as I strolled through the corridors of Balboa Academy, where I teach, a sheet of paper lying on the floor caught my eye. Like every lover of the written word, I am compelled (the central narrator of Don Quixote de la Mancha admits to the same vice early in Part I) to read every scrap of writing that I find, even those on the ground.
My finding, this time, was a student essay, already corrected and graded. As an assignment—in a class other than mine—the student had been asked to analyze George Orwell’s essay “On Why I Write.” Once back in my classroom, I sat down at my desk and started to read the student’s work with interest. The thoughts contained on the page were fluid and clearly stated, giving me the impression that the young person had fully grasped the ideas of the English journalist, essayist, and novelist.
The student’s work stirred my curiosity, so I sought out Orwell’s essay. As I read the English author’s piece, I was pleased to discover that the student’s paper had prepared me to readily understand the notions Orwell expresses.
To summarize “On Why I Write”: Orwell opens by discussing his early development as a writer—beginning at age 5 and concluding at age 30, when he completed his first novel, Burmese Days. Orwell concludes this segment by defending, briefly, his detailed account of the early stage: it was provided, he says, so that readers can access his motivations as a writer.
Orwell then explains how he—based on his experience and on his observations of other writers—determined that there are four categories of authorial motivation:
1. Sheer egoism: a wish to be talked about and remembered.
2. Aesthetic enthusiasm: the pleasure of producing beautiful writing.
3. Historical impulse: the desire to record events as they were, or are.
4. Political purpose: the wish to push the world in a certain direction.
Orwell goes on to note that these artistic impulses often struggle against one another, and that they fluctuate as well—with every writer switching from one to another to differing degrees. Regarding his own motivations, Orwell states that it was his experience as a participant in the Spanish Civil War that led him to become a writer whose purpose is political. And this should not surprise readers, since his best known works are Animal Farm and 1984.
Any writer examining Orwell’s motivational construct would seek his or her category at once. This is only human nature. Focused on that task, then, I quickly concluded that the work of every writer of Nicaraguan heritage will have a strong political undercurrent. Not doing so would be impossible. Nicaraguans experienced a turbulent 20th century—and that turbulence continues. As a result, politics permeates the creativity of all Nicas, regardless of their race, age, gender, religion, or social class.
And with regard to the historical impulse that motivates many writers—that is, the desire to set the record straight—this too plays a major role in every novel I’ve written. My works, instinctively, have been attempts to rescue stories that reside on the margins and move them toward the historical mainstream.
The category of aesthetic enthusiasm is, without a doubt, the one that least describes my motivations. While I work hard so that my prose will be as pleasing as possible, and I try to bestow every page with one or two noteworthy phrases, to write in a beautiful manner ranks low among my creative priorities; instead, in my work beauty is invariably at the service of a well-told story, and not an end in itself.
The category of Orwell’s motivations that best describes my own is that of sheer egoism—where vanity reigns, according to the English writer. What fuels me is the desired to be remembered, to have my work examined and discussed after I am gone. In several essays I’ve stated that the following words of the Spaniard Miguel de Unamuno have become my writer’s mantra: “I write so that people remember I was here.”
Sometimes, when I gaze at the bookshelves at home, the surnames of writers I admire call out to me from the spines, as if beckoning me to set high standards for myself. I know my name shall never elicit the admiration that theirs provoke, but I shall keep aiming at the benchmarks they’ve set. And I will be satisfied, once I’m a feeble literary ghost, to witness, years after my departure, a student at a university picking one of my novels off of a library shelf, reading it, and then telling someone: “There was a Nicaraguan-American author who wrote a few things I find interesting.”
Such is the fuel that keeps me writing day after day. 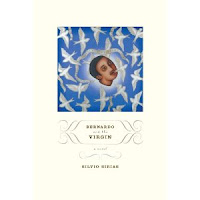 About "Bernardo and the Virgin:"
The year is 1980, and the Sandinistas are newly in power in Nicaragua. Bernardo Martínez, a modest, unassuming tailor in the town of Cuapa, witnesses an extraordinary thing: an otherworldly glow appears around the statue of the Virgin Mary in the church, and soon the Holy Virgin appears. Though a work of fiction,Bernardo and the Virginis based on the real-life experiences of Bernardo Martínez. Silvio Sirias’s sweeping novel tells many stories, weaving together the true account of this humble, devout man with the moving and often humorous fictional tales of the people whom he influenced and inspired. It is also a stormy epic of Nicaragua through the long Somoza years and the Sandinista revolution.

Mr. Sirrias is giving this away at the end of this tour! Stop by each one of the blogs to increase your chances of winning.

Here are the stops:

There will be two live chats with Silvio at the author chat salon at Condor: http://condorbooktours.com/index.php?pr=Author_Chat_Salon

The second will be on Friday June 18th and will be for the questions from the readers of the blogs hosting from June 14-18. Everyone is welcome to attend both sessions and invite others to both, we just want to make sure everyone gets an opportunity for a one-on-one with Silvio.

You can purchase this book on Dulce Bread and Bookshop

This tour was affiliated with Condor Book Tours
Posted by Sandra's Book Reviews at 6:41 PM