Blog Tour: THE MERMAID AND THE UNICORNS by L.T. Getty

The Mermaid and the Unicorns 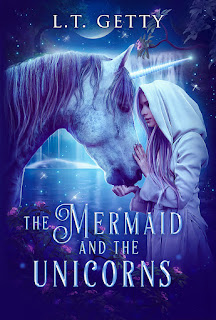 Daphne’s a typical mermaid, and at least according to her, that’s a problem. She’s courageous and has a beautiful singing voice, but lacks the power of an elemental, the ability to command water with the sound of her voice. Jealous of her best friend, she makes a deal with a sea-witch, only to be betrayed, in place of her beautiful tail and flukes Daphne’s left beached with a pair of human legs. The spell keeping Daphne looking human will become permanent, unless Daphne can hunt down and bring the scheming Lorelei a unicorn horn before the next full moon.

Unable to reach her friends and family for help, Daphne doesn’t know how to walk, much less where to find a unicorn or how to catch one. Even if she’s successful, Daphne’s still not sure if she can trust Lorelei and her pint-sized kraken to keep their end of the bargain and let her return to the sea.

"You'll see lots as you travel from place to place," Daphne told the small dolphin. "Come, your mother won't forgive me if I let you roam from the pod."

Why hurry? Echor asked as he swam, spinning around different plants and sponges that grew along the rocks, before focusing in on a vibrant snail. It was not a very old reef, though it was well inhabited by many vividly-colored, small fish. The young dolphin seemed to take pleasure in disturbing them and watching them scurry into their small hiding crevices and among the anemones. You're so lucky that you get to stay in your town all the time. This part of the sea is so beautiful!

"I think it would be neat to see so much of the ocean," Daphne said, thinking of her small town of Thranda. Unlike the dolphins, who often travelled long distances in a single day, most merfolk lived in towns unless they left their communities to hunt or travel to another community. She had known members of his family since she was a little mermaid, and only got to see them a few times a year when they passed through her home to feed in a nearby bay. She heard a series of warnings behind her—the other dolphins had detected something with their echolocation. Unless it was something exceptionally large, they should have been safe within the pod, but Echor was very young. "Echor, let's return to your family." The young dolphin had wandered off while Daphne had turned her head, chasing a seal that had left her bob, trying to swim away from Echor.

"Echor!" Daphne called, swimming after him. She caught up to him, then looked over her shoulder as she heard a familiar sound. An orca! Daphne suppressed a shudder. It was large, but far enough away for her to find a hiding space. Still, killer whales almost always travelled in groups. The killer whale dove when he spotted her. She knew the others would want to help, but they were no match for an orca. He swam quickly towards her and Echor. Daphne knew she would be hard pressed to out-swim the large creature.

Hide! the orca told her.

Daphne then saw the immense shadow and wooden keel of a ship following the orca. The killer whale dove deep, though the water was too clear and shallow to truly hide his massive form. A harpoon followed him, missed, and was quickly pulled back to the surface by a rope. Another harpoon plunged into the water, and then another. The rough waters churned green and grey in the ship's wake, and Echor's warning chatter only told her that there was another human vessel. It came from Daphne's left, and it dragged a net behind it.

I wasn’t certain how to go about talking about my inspiration because I think it comes from all over. If I read a book, I may incorporate things I like in a draft both consciously and subconsciously. I used to love finding an author voice I loved and emulating it in a short story. I also could talk about one medium. Art? Love it. Music? Don’t understand it but it’s important. Other authors? They did all the heavy lifting.

I set out wanting to write a book for my niece, and I consciously wrote it to be in familiar a framework as possible and friendly for a beginner while at the same time being its own unique story. My niece is an amazing reader now who reads more than I do, but she was just starting chapter books.

I think a mistake I made as a younger writer was wanting to be original as possible, all the while taking classes and anyone and everyone telling me that I can’t possibly be original, but I can hope to write well. I’m not going to argue if there’s really only three plots or if I can help but being derivative, but one of my key influences, CS Lewis, had this to say on the subject:

“Even in literature and art, no man who bothers about originality will ever be original: whereas if you simply try to tell the truth (without caring twopence how often it has been told before) you will, nine times out of ten, become original without ever having noticed it.”

I think at the end of the day I wanted a story for my niece that wasn’t about attributing amazing skill or about being the chosen one. She doesn’t have to be an Amazon-princess to belong on an adventure. The story is ultimately about the power of choice and being okay in your own skin – or fin, in this instance, and being the best version of yourself as opposed to tacking on qualifiers.

I also wanted to pass on a fairy story that was shameless about being a high-fantasy fairy tale adventure, before we got to the nitty gritty and dark retellings that are allegedly for adults.

I don’t know if this book I wrote will appeal to a child you know, but while it’s still okay to install a sense of wonder and imagination, I think its important to try to do and find something to do for a child in my life. I’m not saying the love of reading is the only thing that matters: maybe it’s building something, or encouraging them in a love of music, or teaching them how to play chess. We all have different strengths and weaknesses, but my short answer is I try to be the person I would have liked to have around when I was growing up.

I never really much cared about dedications in books before, but I guess I get it now.

L.T. Getty is a rural paramedic from Manitoba. She enjoys writing science fiction and fantasy and generally being creative.

L.T. Getty will be awarding a $20 Amazon/BN GC to a randomly drawn winner via rafflecopter during the tour.

a Rafflecopter giveaway
Posted by Book Club Reviewer at 12:29 AM