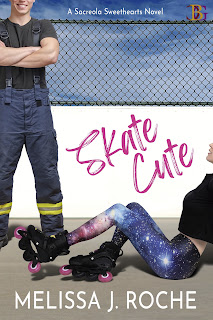 Kriss heads home to her small prairie town with 98% of an astrophysics PhD, a load of memories she’d rather not think about, and a survival plan: skate and graduate. Her plan doesn’t include the attention of a familiar admirer from the nearby fire station, one with an impressive physique, a hidden singing talent, and a smile dazzling enough to sweep her off her skates. Before she knows it, she’s falling for him—hard.

Chase has settled into the rhythms of his small-town firefighter routine, but he remembers Kriss from high school: the starry-eyed skater girl on her way out the door of his life. Now she’s back, just as gorgeous as ever, spinning around the next-door rink without a care in the world. Or so he thinks, until Kriss is targeted with mysterious acts of vandalism designed to derail her dreams. Can he help Kriss find the courage to stand up under the attacks and trust herself to love again?

He rounded the first corner at the far end of the field and snuck a glance back toward the rink just in time to watch Kriss’s long ponytail sail out behind her helmet with another tight spin. That one must not have gone quite as planned, because she stumbled a little and lurched sideways. But she recovered gracefully enough with a quick laugh a moment later, as if she enjoyed the thrill of almost wiping out on the concrete.

Yup. Gotta fall to get better. His ass knew as well as anyone else’s, after too many falls on that very same rink, shuffling his own inline skates and hockey stick around one of the goals in his spare time.

Too much of his spare time. But he wasn’t so bad on wheels himself, these days—MVP on the fire department’s informal team, crushing the police department’s lousy attempts at rivalry in the yearly Battle of the Badges tournament.

His high school self would die a thousand deaths before admitting it, but young Chase had taken up street hockey for a very… specific reason. Kriss had been just as badass on her skates all those years ago as a senior at Sacreola High, three years ahead of him. Hot, smart, and senior—and totally out of his league.

She had graduated and moved on without giving him so much as a second glance. But his newfound love for skating had stuck around long enough to turn him into a decent hockey player on the side. No harm done.

What are the main components of a romance?

What a great question! I’ve found I’m pretty picky about the romance I read and write, and as such I have lots of ideas about what constitutes a good romance, but at the same time I recognize that my opinions are just that: my opinions. No one else has to agree with any of my ideas here, but these are the aspects I look for in a good romance novel.

I don’t have to believe anything else about a book—the setting, the plot, the technology, the sparkly skin of the magic system—but I have to believe the characters. I want to feel their emotions, act their actions, react their reactions inside my own head. I want to follow their arcs from the beginning to the end, see the way the characters are shaped through each scene and conversation. The surest way to boost a book from “fun” to “favorite” on my shelves is to craft characters I can’t forget even after I turn the last page.

Conversely, the fastest way for an author to lose my interest in a plotline is to maneuver the characters’ actions and emotions to fit the author’s needs. For example, if a heroine is going to keep a lie secret from the guy for two thirds of a book, it had better be because of something inside her as a character, not the author’s need to drag a story out of her as a plot device. Or take contrived emotions, such as one main character’s anger toward the other. Flawed characters prone to angry outbursts I can understand—and love—but any sort of contrived emotion is an immediate turn-off.

The irony? My editor is always helping me smooth out the wrinkles in my own characters among the pages of my novel drafts. Realistic character arcs are easier dreamed up inside my head than penned out on the page. Thus I have to take my own words here with a sizable dose of humility, recognizing the daunting task of crafting characters for a novel.

I find this aspect of romance writing to be the most fascinating, because it varies so widely. It’s not just about how much bedroom rodeo an author slips between the sheets—or not—it’s more than that. I’m sure I’m not the only romance reader who has yawned through an explicit scene in one book while staying up late into the night to follow the teasing innuendo of a sweet romance in the next. The key to the page turner? Satisfying sexual tension.

I think satisfying sexual tension in a romance novel depends on two things: promise and pacing. Promise relates to the expectation that the author sets up in the reader’s mind, both at the outset of the book and throughout as the story progresses. Promise tells a reader whether to expect a mild sweet romance or steamy erotica, and reader satisfaction often depends on avoiding surprises on either end.

Once promise has done its job with the setup, pacing steps in to carry the tension from page to page. Simply put, pacing refers to the speed at which events happen in a plotline, and it’s crucial to sexual tension. It doesn’t matter if a story features love (slash lust) at first sight over a wild wedding weekend, or a slow-burn, friends-to-lovers relationship that spans decades—the author’s choice of pacing can spool out the tension to keep readers turning pages.

3. A “happily ever after” ending

I have a love-hate relationship with this one, but I do admit it’s one of the must-haves of the romance genre. I’ve lived enough life to know that happily ever after (HEA) is a pretty little lie dressed up in princess pink, but I haven’t lived enough life to make me stop wishing it could be true. Just this once, just this story, just this epilogue—when I read romance, I want a good HEA at the end.

Not a cheap HEA, mind you. See above, points 1 and 2: I want the characters to work for it, to fight their flaws (and flirt aplenty) before they fade off into the sunset. I want to extrapolate the character arcs I’ve followed for 200 pages into a plausible future for the lovers I’ve fallen in love with, one that includes at least the pursuit of happiness. Bonus points if a romance can get me to believe the characters could work through any future difficulties in addition to those they’ve already solved between the covers. (Of the book. Book covers. What did you think I meant?)

That’s it! That’s what I’m looking for in a good romance. Did I miss anything? What makes a good romance story for you? I’d love to hear what you think in the comments! 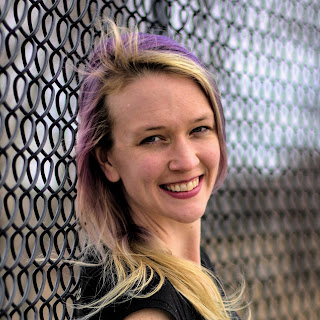 Melissa received her first pair of black-and-hot-pink inline skates in fourth grade, a couple of years before she swore her life to the study of the stars (in a fit of sci-fi inspired passion). Two decades later, she has acquired several larger pairs of skates and an astronomy PhD, both of which tend to slip out from under her at the most inopportune moments. She enjoys skating and singing at the neighborhood rink in her small town in Colorado, where she lives with her husband, two boys, and a cozy lap cat. Only one of which is allowed to read her writing over her shoulder.

Melissa J. Roche will be awarding a $25 Amazon/BN GC or a digital copy of the book to two randomly drawn winners via rafflecopter during the tour. a Rafflecopter giveaway
Posted by Book Club Reviewer at 12:31 AM