Blog Tour: KYLE AND COREY AND THE GAME-STORE MYSTERY by Joe Stephens

Kyle and Corey and the Game-Store Mystery 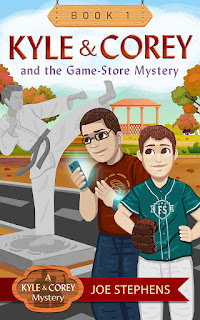 Kyle & Corey Holley (15 and 12) live in Fairly Springs, a small southern beach town. Kyle is a budding engineer; Corey is impetuous, funny and sports-crazy. Like most brothers, they fight often, but they also solve crimes—like the rash of recent robberies around town. When Kyle and Corey investigate, they learn that in each robbery, the thieves stole a high-end desktop computer. Why? What are they looking for? And how soon till they find it? Other complications include Corey's wheelchair-bound math tutor, Kyle’s after-school job in a local game store and a revolutionary new video game launching soon.

Kyle and Corey: Brothers. Best Friends. Detectives. They don't go looking for trouble; it has them on speed dial!

That night at dinner, sitting at their comfortable round oak dining table at

“He is a pathological liar,” Kyle said, helping himself to more mashed

potatoes and pouring a generous helping of brown gravy over them.

Corey, sitting across the table from him, glared over his plate of sliced roast

beef, steamed broccoli, and a smaller helping of mashed potatoes. “Liar is a

strong word. I know the difference between truth and a lie, you turd.”

“Corey!” his mother said in warning.

“Well, I do. I only lied at the end a little, when I said the whole thing was a

know what happened this summer.”

“That’s why I did it. If she’d thought it was really true, she’d have asked all

kinds of questions and probably made me write a whole other paper. She’s that

Mrs. Holley looked affectionately at her younger son. Corey had a knack for

picking out the essential personality traits in everyone he met, almost instantly.

months to root out.

Her husband Donald was proud of Kyle for his math and science abilities, his

kind and forgiving nature, his loyalty to friends and his gift for taking raw

materials and turning them into something new and unexpected. He was proud

of Corey for his people smarts, his vivid personality, and his natural ability as an

athlete. “I wouldn’t trade either of ‘em for a million bucks,” he told his wife

often, and she always answered, “Wait till someone makes you an offer.”

My review: 15-year-old Kyle loves video games and has a knack for solving mysteries.  He soon starts working after school at a gaming shop, where he gets an unusual feeling about something. He can’t help his suspicions. Along with his little brother, Corey, he works on several, little mysteries that don’t always involve the game store.

An easy read overall. You mostly hear about the boys in school and in sports. There were some lagging areas, so it took a while to get to the mysteries. It wasn’t as focused on the game store, which was the titular role of the book. Still a nice read.

JOE STEPHENS has been a fan of boys’ adventure books all his life, and in

this, his first series book, he’s created two boys as memorable as Frank and Joe

Hardy. He has a background in education and has also visited more than thirty

countries while pursuing his passion for scuba diving. He lives in Georgetown

with his growing family and three thoroughly spoiled cats.

Joe Stephens will be awarding a $25 Amazon or Barnes and Noble GC to a randomly drawn winner via rafflecopter during the tour. a Rafflecopter giveaway
Posted by Book Club Reviewer at 12:30 AM