Review: HOW A MONSTER IS MADE by Rashell Lashbrook 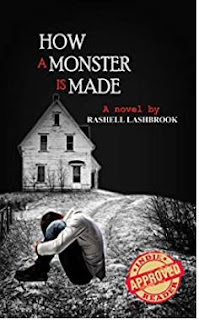 Curious and energetic, Randy Carter is an ordinary enough little boy in the beginning. Born post-WWII in a sleepy Texas town, he is the middle child of an alcoholic father and a mother who suffers from bouts of severe psychosis. Forced to survive in an unpredictable world of violence and poverty, Randy develops into a calculating young man with a growing need for control.

Bad things happen when Randy is around.

Evil incarnate or just a broken child? Sociopath or victim? What is undeniable is the path of destruction left in his wake. There is a fine line between prey and predator, and Randy Carter is about to cross over it.


My review: It starts off with Raine’s dreadful killing of her father, Randall. During those last fleeting moments, Randall thinks back to when he was a baby cradled in his mother’s arms. His whole life flashes before him. This is the story of Randall’s life.

His abusive childhood unfolds in a well-crafted and sorrowful narrative, which takes on a soft and languid pace, settling the reader into complacency. You certainly understood why and how Randall became the monster that he was in the first book, but his story wasn’t as easy to get into. I’m not usually fond of prequels (the story before the story, one that you already know how it ends,) but it was still a pretty good read.