Review: A CHARACTER IN REALITY by Nicholas Bridgman 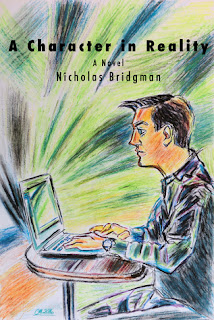 Robert Gladstone is a detective trying to infiltrate a drug and Trojan horse conspiracy. Actually, he’s a fictional character from a crime thriller novel, and, lately, he hasn’t liked what’s been written for him. So, you see him, literally, battling with the author A.K.A. “the narrator” right from the start.

“Robert was the only one who had found out—the only one astute enough to see that the narrator did not always make him speak and think as he really spoke and thought. He was observant, he really listened to his own words, he could tell something was controlling him, directing him, some supernatural force beyond his world.” (7)

“Was there really such a person as a creator, a writer, who made everything?” (11)

Having had enough of the fictional world, Robert soon finds himself in the real world, controlling his own dialogue and movements, feeling what it’s like to be real.

“There is a whole new potential for me out there, in your world. Things us characters could never even have dreamed of: free will, consciousness, independence, opportunity— the opportunity to be anyone, to become anyone, that I could ever want to be.” (11)

Throughout the book, the narrator tries to teach the character how to acclimate in the real world through breathing, exercise, and standard living. Let’s face it, to exist out here, you need to learn how to survive. It was fun seeing Robert trying to adjust to our way of life. Still, he was a character in a book and had to go back to finish the story. So he was living two stories at once.

But, then the character realizes that life in reality isn’t all it’s cracked up to be. For one thing, working a real job can be boring and uneventful. True dat! At that point, he decides he would rather go back into the novel instead of living an insipid, soulless life in reality. Until he realizes that he can’t go back, so, instead he seeks acting as a way to fill the void of fiction. It’s a classic tale of “the grass ain’t always greener on the other side.”

Things become grislier when the violence and crime sprees he experienced in novels transcend into the real world. Suddenly, it’s an issue of immigration and it results in acts of terrorism. Life turns to fiction and fiction turns to life. It’s a cross-over gone wrong. The only thing that didn’t captivate me as much was the political aspect, but, luckily, it doesn’t take much precedence.

A CHARACTER IN REALITY is such a simple and intriguing story.

My rating: 4 stars
Posted by Book Club Reviewer at 7:41 AM