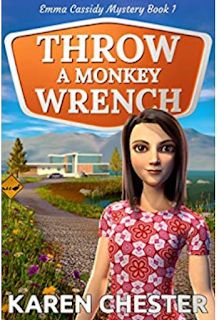 Emma Cassidy was a party planner. At an elegant party for one of her toughest clients, people were collapsing at the dessert table. What was going on? This surely wouldn’t be good for business. Naturally, Emma wasn’t surprised when her client was screaming at her, threatening to sue. In the end, she might’ve gotten some cancellations, but, at least, she had that big wedding to plan (not her own, of course.) This was a wedding of star-crossed lovers from opposites side of the track (she’s rich and he’s an outlaw,) so, of course, the bride’s parents were less than thrilled.


Suddenly, the client from the poisoning disaster ends up murdered and the groom was a suspect. The bride’s parents hated the boy and would do anything to throw a wrench in the mix. Meanwhile, the wedding was off and so was Emma’s commission along with any possible job prospects. Can she solve this mystery and prove a good man’s innocence?


This was a good mystery. There were lots of suspects and several mysteries in one—the poisoning, the hit-and-run, and the murder. There were so many angles and so many possibilities that made this an interesting and compelling read.


I don’t know how I feel about the cover. The 3D imagery looks very stiff and robotic. Absolutely no life to it. Not like Pixar at all.


Still, this was a good mystery!