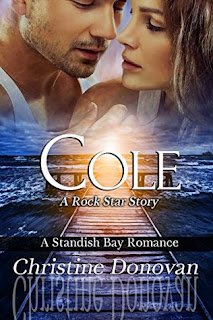 One night, Cole Jackson arrives at the hottest, drunk and high, and finds his wife dead, stabbed to death.


15 years later: Cole has just been released from prison, incarcerated for 2nd degree murder. He reunited with his band and was hoping for a comeback. What would they see? A killer? There was nothing like going to jail for something you didn’t do. He was just glad to be playing again.


Shannon is a successful author. Cole often read her books in jail and was a fan. Meanwhile, Shannon had always harbored teen fantasies of her favorite singer, Cole. She never even dreamed that she would meet him in person. And, boy, did he look even better now. She never believed the hype, that he killed his wife.


As the two get closer—emotionally and physically—they make a mission: she would prove his innocence and he would find his cheating wife’s real killer.


I thought this was overall enjoyable, but there was some lag here and there. The suspense was not as heightened as it should’ve been, even though there were some enticing parts like the random attack on Shannon. The physical chemistry between the characters is good, but it does take a while to get there with endless foreplay and flirtation.