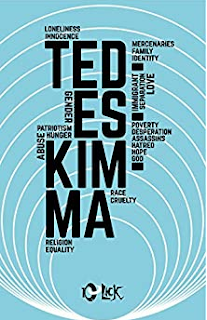 The group sat in silence for the next few hours, stunned by everything they had been put through, trying to piece it all together. Their ears perked up a few hours later, when they heard the screams and cries of a large group of children coming from one of the adjoining rooms.
“DIIN! DIIN! Are you there, child?” DIIN’s father screamed.
“CREFY! My little baby! CREFY!” CREFY’s mother screamed.
All four parents pressed their ears against the wall, hoping to hear a reply from DIIN or CREFY. But all they could hear were the screams of a hundred terrified children. The parents did everything they could to isolate the cries they heard, hoping that one of them belonged to their little babies. But their efforts were futile. There were simply too many voices, too many innocent little children crying for their mommies and their daddies after being cruelly separated from them, too many little bodies trembling with fear, too many tiny souls unable to understand or cope with the barbarity they were experiencing.
“How many of them are there?” CREFY’s mother asked. “A hundred? A thousand?”
“Too many,” CREFY’s father replied. “Too many.”
“They’re just children. Helpless little…” DIIN’s mother said, as she fell to the floor sobbing.
“What is happening? What is this cruelty?” DIIN’s father asked, as he fell to the floor. “Is this a nightmare? Is this hell? Is this a nightmare? Is this hell?” he began repeating, as he held his head in his hand, and rocked himself back and forth, alternating between screams and sobs.
“This cannot be the utopia we sought. It just cannot be. We traveled all this way. We sacrificed so much. It can’t be. Not for this. Not for this…” CREFY’s father muttered. He ran to the door and began banging on it, screaming for help, begging for answers, hoping that there was at least one kind soul in the building that would respond, that there was somebody out there who would take pity on them, and listen.
But no one did.

EXCERPT 2
(From Chapter 83: THE HUNT)
The creature cautiously moved around the IZOLAI, growling as it looked for an opening. Its fur, and the interlocked plates that covered the upper parts of its body, were jet black, as dark as the night that surrounded them. Its paws, all four of them, were plated as well. The creature had a long tail, and a single horn, that was as sharp as it was deadly. The IZOLAI could barely keep up with it as it circled her. She would have had a great deal more difficulty seeing it if it wasn’t for the creature’s bright green eyes. Their glow pierced the darkness and reached her, and gave her a guiding light that she could use to follow the creature’s movements.
The IZOLAI steadied herself as the creature stopped and gnarled at her. She could make out that two of its upper teeth were longer than the others. The creature, with a single, swift movement, pounced at her before she could gather any more details about it. The IZOLAI jumped out of the way just in time, with barely an inch to spare between her left eye and one of the longer nails on the creature’s right paw. The creature landed before the IZOLAI could, and before she knew it, it had lunged at her again. It was all she could do to touch her feet to the ground and roll out of its way. She fully expected the creature to attempt a third lunge, and she had already calculated that it would be one she couldn’t avoid, but the attack never came. The creature instead stood in place, and assessed her for a few seconds, as she steadied herself and got back on her feet. While the creature examined her, the IZOLAI slowly put a hand on the sheathed blade that was attached to the back of her waist. She pulled the blade out partially when she saw the creature ready another lunge. Her hand movement, subtle as it was, gave the creature pause. It growled at her softly, before it slowly took a few steps back and disappeared into the darkness.

EXCERPT 3
(From Chapter 61: THE MALL)
CHOTY forgot about these thoughts as soon as the escalator reached the topmost floor. He ran into his section of the floor, and stopped right in front of his quarters. He borrowed a stool from one of his brother’s followers, and looked into his house through the tiny windows in its makeshift walls.
“Your brother isn’t home yet, little bruda. Go! Hide!” the OSZA he’d borrowed the stool from whispered.
CHOTY snuck into the house carefully. It wasn’t that he didn’t trust the OSZA. It was just that his brother could be really sneaky when he wanted to. It wouldn’t have taken much for him to have made his way into the house without the OSZA noticing. Even CHOTY had managed to accomplish that feat a few times already. CHOTY slowly made his way to his favorite hiding spot, one silent step at a time, examining every inch of his house as he did. He was satisfied with what he saw, until he thought he heard a snicker. CHOTY stopped moving, and slowly looked around the house, focusing on every sound he heard, while doing his best to stay as still and as silent as possible. He was about to begin moving again when another snicker reached his ears. CHOTY gave up on stealth, and began to wildly run around the tiny room that was his house, searching every nook and cranny he could think of. He had made his way through half the room when the snickering OSZA dropped all pretenses, and began to laugh loudly, in a deep voice at first, that soon turned into shrill howls.
HOTHEAD! CHOTY thought. Only he laughs like that.
Before CHOTY could dart around looking for him, HOTHEAD fell out of a nearby cupboard. He collapsed on the floor, convulsing with laughter as he did.
“You… should… look… at your… self… CHOTY… You… so… fun… ny…” he managed to blurt.
CHOTY ran over to him, and kicked him as hard as he could. HOTHEAD, as usual, winced with pain while simultaneously laughing even more.
“Where is my brother?” CHOTY asked him, as he grabbed one of his ears.
“Who? CHILLA? How should I know, little bruda,” HOTHEAD said, continuing to laugh.
CHOTY brought his mouth to HOTHEAD’s ear, and screamed into it, as loudly as he could. HOTHEAD grabbed him and held him down while he continued to laugh.
“You’re mean, little bruda. And to think I actually brought you something,” he said.
CHOTY’s eyes lit up. “What? What? Show me. Show me! Please!” he screamed, as he did his best to get out of HOTHEAD’s grip.
Posted by Sandra's Book Reviews at 11:36 AM