Blog Tour: I KNOW WHEN YOU'RE GOING TO DIE by Michael J Bowler

I Know When You're Going To Die
by Michael J Bowler 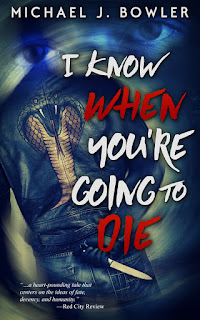 Leonardo Cantrell is a painfully shy sixteen-year-old who cannot look people in the eye. One night while he’s volunteering at a homeless shelter, an old man forces eye contact and gives Leo the power to see Death.

His best, and only, friend—J.C. Rivera—thinks this new power is cool until Leo accidentally looks into J.C.’s eyes and “sees” his murder, a murder that will occur in less than two weeks. Stunned and shaken, the two boys sift through clues in Leo’s “vision” in a desperate effort to find the killer and stop him before he can strike.

Aided by feisty new-girl-at-school, Laura, the boys uncover evidence suggesting the identity of the murderer. However, their plan to trap the would-be killer goes horribly awry and reveals a truth that could kill them all.

After lunch, we head to a nearby McDonald’s and buy bags of hamburgers, chicken sandwiches, and fries to give out on the streets. I make momentary eye contact with each person I hand a bag to because I want them to   know they’re human like me. But I can’t hold it for more than a second until, beneath the dim shade of the freeway overpass on Main Street, this one man grasps my arm as he takes his bag. He’s a regular named Hank, an older guy with a limp who always wears a dirty Dodgers cap and mismatched clothes   I’m sure he found in a dumpster.

“Thank you, Leo.” Hank’s voice is strained, but sincere.

I force myself to look into his grateful eyes and our gazes lock. I can’t    seem to look away. It’s like I’m being drawn into Hank’s  very soul. Then I see it! Gasping, I lurch back and yank my arm away from him.

He recoils, looking stung by my action, and I want to apologize, but no words come. I’m paralyzed by what I just saw and can only offer him a silent nod.

Gripping the bag with gnarled fingers, Hank lurches down Main Street until he reaches the corner and turns out of sight.

My review: 17-year old Leo has been volunteering at a homeless shelter for the last three years. One night, he comes across a homeless man who’s been watching him, saying that he’s “the one.” Leo took his hand and stared into the vagrant’s eyes and…suddenly everything changed. The man gave him a gift…or a curse. He couldn’t be sure, but he couldn’t die until he passed it along.


Now, every time Leo looks into someone’s eyes, he knows when that person is going to die. Ooh, chilling! Imagine knowing the exact date that someone will die. What would you do? Would it be wise or foolish to warn that person? But wouldn’t that interfere with death’s plan?


Obviously, Leo doesn’t know what to do with this new power. But what’s worse was that he looked into his best friend’s eyes and saw his death. What to do now?


Story was easy to get into. The reader can engage so well with the character as he traverses through high school with the weight and uncertainly of this new burden. There were some lagging areas here and there, but, ultimately, this was a worthy read. 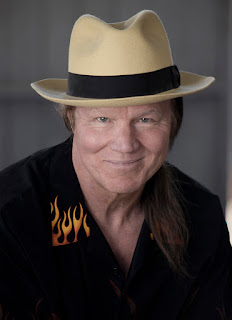 Michael J. Bowler is an award-winning author who grew up in Northern California. He majored in English/Theatre at Santa Clara University, earned a master’s in film production from Loyola Marymount University, a teaching credential in English from LMU, and a master's in Special Education from Cal State University Dominguez Hills. Michael taught high school in Hawthorne, California, both in general education and to students with learning disabilities. When Michael is not writing, you can find him volunteering as a youth mentor with the Big Brothers Big Sisters program and raising his newly adopted son. He is a passionate advocate for the fair treatment of children and teens in California, and hopes his books can show young people they are not alone in their struggles.

Michael J. Bowler will be awarding a $25 Amazon/BN GC to a randomly drawn winner via rafflecopter during the tour.