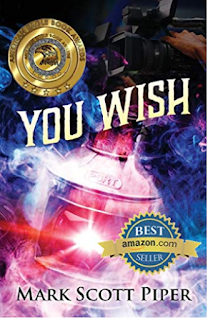 Imagine you are granted three wishes--and your second wish is captured by a television news crew and broadcast across the globe. Now the whole world knows you can wish for absolutely anything, and it will come true. Now imagine you're fourteen years old.

Jake Parker is about to finish the freshman year of what's shaping up to be a mediocre high school career. He's a late bloomer. His family is living hand-to-mouth. And worst of all, he's a nobody--until he discovers an ancient ship's lantern. With everyone on the planet watching to see what Jake's final wish will be, he becomes an instant media darling, and his social status at school skyrockets. That's the good news.

The bad news is pressure is bearing down on Jake from family, public opinion, the media, government agents, and crooked politicians as he struggles to come up with a final wish that will truly help mankind. But if he's going to pull that off, he has to outsmart them all.

Adults and teens alike will love Mark Scott Piper's debut novel, You Wish. Brimming with magical realism, social satire, and wry humor, Jake's story is about much more than the plight of one teenager. It's about the power that anyone, young or old, has to truly benefit humanity--even if the odds are stacked against you.


My review: Jake Parker was your typical 15-year old geeky scrub. All he wanted was to not look like a dweeb. But “it’s lame to want stuff that’ll never happen.” (3)

Story has several points of view (Jake, his mom, some land developer, etc.) It had a slow start with talk of the Old Addison place that was bound for renovation. Jake has a wild imagination, making himself to be a pirate (weirdo!), and the boys talk a lot of sports, which wasn’t too interesting to me only because I’m not keen on sports.

One day, Jake finds an old lantern in the Old Addison place and he gets to make 3 wishes. Now we’re getting somewhere. What if you could wish for anything? What if the whole world knew about it?

Suddenly, Jake and his buddy could wish for anything. How cool is that? The possibilities were endless. He could wish to be popular, be richer, or do something really important like end world hunger or cure cancer. But, somehow, the media gets wind of this and suddenly all eyes are on him. The whole world was in a craze, wondering what Jake’s wish would be.

I’ve always liked wish fulfillment stories from Jeannie and Aladdin and even that exotic chick from Weird Science. And this book certainly had an interesting premise. However, it had a slow pace, and I wish it would’ve been simpler. Why the need to have so many points of view? I thought that made it a little too complex. But I liked the idea and it was a decent read overall.