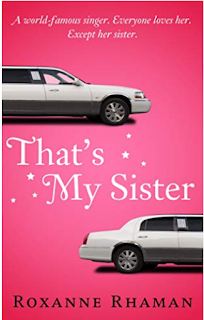 Having a younger, beautiful sister is hard enough. Having one who’s on the cover of magazines and is loved by all? Torture. For single mom Marie Stephens, all she wants is to survive her new business, provide for her children, and ignore the intense feelings she has for her married neighbor.

When her famous sister, Sadie, shows up after a five-year absence, Marie’s normal life ceases to exist. Add in their celebrity-obsessed mother, it’s no wonder they can’t get along.

The most important thing Sadie and Marie will learn? Accepting your sister can change your life.

My review: It’s tough when your sister is Sadie Stephens, notoriously famous singer and actress. Marie was a bookstore owner that stored and sold her own books (she was an author struggling to make ends meet.) She was often juggling work and motherhood as well as harboring a secret crush on her married neighbor.

After the father’s death, Marie was staying at her mom’s with her 2 daughters. She never expected to find her sister and their doorstep.

“My sister walks in the door, and I turn into a little girl raging against the unfairness of her life.” (LOC 417)

Jealousy and resentment toward her famous, attention-hogging sister boils to the surface. It’s a battle between an emotionally empty shell and a self-absorbed celebrity.

In the midst, Marie realizes that her married neighbor, who has a daughter of his own, wasn’t married after all. Could this be her chance at a romance? Well, she was trying to anyway. If only her sister wasn’t back in the picture.

Story was a pretty good read overall. It had a lagging pace and it wasn’t as comical as I’d hoped, although Marie did have a refreshing wit and a down-to-earth stamina. Her hard-working ethic and independent streak make her a relatable character.

Excerpt:
I've had the same dream for the last few weeks. If you knew me, you'd understand how unusual fantasizing about my neighbor was. He had a wife, of course, and I'd never act on my feelings in real life. But, am I hurting anyone when I fall asleep, wishing for another encounter?


I'm eager for the first part, at least. I always hope for a different outcome.


Anyway, the dream, maybe nightmare, starts the same. I'm sitting at the desk in my little bookstore, looking better than possible in real life.


My hair? Gorgeous. Every strand in place. My clothes? Pressed to perfection. I'm even wearing makeup.


As I consider closing for the night, I glance up. And Jeffrey's there.


I've only spoken to him once, when I first moved in, just enough for the crush to develop. He was tall with light brown skin, and fit. I mean, his muscles bulged under any and every shirt.


He wore glasses, sexy black ones that complimented his face and made me salivate whenever I caught sight of him. The best part? He had a cute laugh, like he almost seemed embarrassed to find something funny.


In the dream, he appears in my office doorway. Without saying a word, he crosses to where I'm sitting and pulls me up. He starts unbuttoning my blouse, his fingers moving slowly as my heart pounds.


My hands lift to return the favor. They're shaking I'm so eager.


He pulls me close. I lift my chin, letting him see the invitation. He lowers his mouth. I go up on my toes to reach his lips. Before they meet, someone fills the doorway, spoiling the moment.


Before I see her face, her beautiful, dark, flawless face, I know Sadie's standing there.


The sister I've barely spoken to in five years.


I should explain a little. She's a singer. Well, not just a singer. She's a famous one. The kind that's an actress, too. The kind who attends every award show. That stars in movies and is hounded by the paparazzi.


The kind most people secretly admire even as they judge her tumultuous public life.


The moment Jeffrey sees her, he abandons me and hurries to her side, giving Sadie the kiss I had craved. Before witnessing more of their treachery, I wake up.


Imagine if one of the most notorious women in the world was your sister. And you were me, an average woman struggling to get through each day.


I know what you're thinking. But I'm not jealous of her. And I know she'd never act so inappropriately in real life, except for that one time.


Three times. But that was high school.


I just dread the inevitable day when people in my life learn she's related to me. When they become my friend, hoping to one day get an introduction.


That's when I turn into nothing. Nothing more than an addendum in the biography of The Sadie Stephens Story.

Posted by Sandra's Book Reviews at 9:26 AM