Review: A IS FOR AUTHOR by Brenna Jacobs 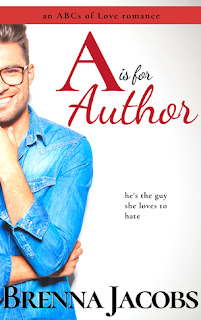 Emma was a serious author. Her first and only book was published 5 years ago, which was why she kept her day job as a lit professor. She was never much for panels and book signings, but this one was run by her favorite librarian, so she had no choice but to join. She just hoped the audience wouldn’t ask when her next book was coming, because she was deep in writer’s block.


Aidan Maxwell was a famous author. Everything he wrote was an instant bestseller. He was such the typical arrogant alpha male he wrote so much about.


She writes literary fiction. He writes genre fiction. So, naturally, the two would clash at the panel discussion. It became The War of the Authors.


Emma was jealous of Aidan, of course. Yes, Aidan was an arrogant bastard, but she was really no better. She was such the pretentious, snobby artist, “living for the literary masterpiece.” She literally over thinks every word she tries to write. Aidan was much more laidback about his work. The two couldn’t be more different—like fire and ice.


Story was okay, but I just didn’t see a love connection here.