Review: THE VOICE OF DEATH by Lawrence J. Epstein 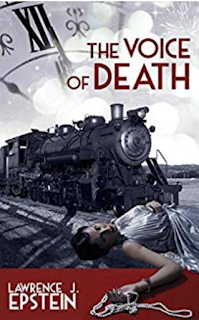 Danny Ryle is a P.I. and the son of the world’s most renowned killer. While celebrating a new year his wife, he gets a plea from some guy whose wife just shot herself. He thinks the police will arrest him, so he wants Danny to find out what happened. Why did she do it? Could the guy have heard her scream have done something?


Another case came from Danny’s boss, the congressman, who had a woman searching for her lost love—a man she saw on a train over 30 years ago. She asks Danny to find him.


So Danny had 2 cases with no clues. Nothing the best detective can’t help.


At first, Danny struck me like a smart and inquisitive detective. This sounded like it could be a good mystery, and this story had two. But then Danny finds out that his wife was still married to her ex. What?!


There’s a lot of back-and-forth dialogue without any nouns, so you’re not really sure which character is talking. It also seemed to have a lot of little mysteries with so much inane detail that eventually you just get lost in the shuffle.


I thought this would be an interesting read, but, man, what a disappointment.