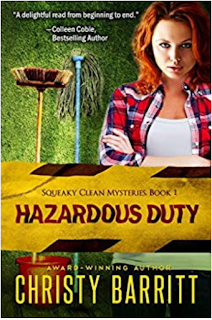 A crime scene cleaner. You don’t run into a job like that very often. Someone asks you: “What do you do?” Answer: “I mop up blood.”  Not only that, but you also clean up fragmented skulls, guts, and other unknown fluids. Yeck!


But, like Gabby said, you had to have a sense of humor to do a job like this, and she was all funny about it. I liked it.


Yes, cleaning up crime scenes was okay, but what she really wanted to be was a crime scene investigator. It’s amazing what a crime scene can tell you about the order, the suspects, the victim, everything.


While she was cleaning, Gabby stumbles upon the murder weapon—a gun. If only the police would stop thinking of her as a janitor and take what she found seriously. When the crime scene is burned down with Gabby inside, she loses all her equipment and her only employee/friend is arrested for arson. She would prove his innocence if it was the last thing she did, even if it meant accusing a high-profile Senator elect, who seemed as cold and vicious as they come.


Smart and witty! Gabby was a great, little sleuth. This was one of those reads that got better and better with every page.