Review: CARNAGE AT THE CHRISTMAS PARTY by Holly Tierney-Bedford 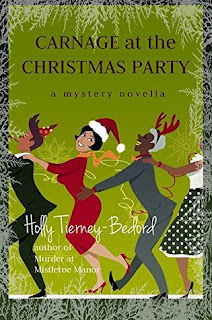 Charlotte works for a chauvinistic, arrogant, lazy boss, who often accuses her of not doing the job she was hired for. As a party/event planner, she’s supposed to set trends and motivate the employees. In fact, the office title on her plaque reads “Spreader,” as in spreader of cheers. Too funny! She has that holiday office party to prove to him that she can do this.  If she can’t spread it at the Christmas party, then she’s out of a job.


I enjoyed this story for the most part. Charlotte’s boss is so irritating that it makes it harder for her. He makes her feel so incapable and dumb. How was she going to make a miserable company happy? Working in a boys club, she has to come up with “extreme and fearless” ideas. But what? If the boss is bored at the party, she’s fired. Yeah, no pressure. How dare he actually tells her to put an ad for her job in case she screws up and has to hire her replacement. Really?! Grrrrr!


I totally get the plight of the worker, especially when dealing with an impossible boss.


As we get closer to the party, the everyday banalities hit big time, which made the reading less interesting. What’s with the day-to-day play? The party prepping took forever. Kinda long for a novella. There was really no mystery to this. Yeah, we have that mass murder and, for some reason, the only thing that Charlotte can obsess over is where to hold the party now?


A decent read though.