Review: STEEL JOURNEYS: THE ROAD TO PATAGONIA by Lynda Meyers 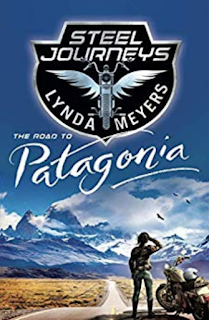 Her need to venture out and see what the world had to offer was something I could relate to. Ah, the itching bites of Wanderlust.

The purpose behind Steel Journeys, a motorcycle touring company she founded, was for women like her to experience freedom. For Abby, home was the road. The last thing she expected to get at home was a visit from her ex-boyfriend, who cheated on her 15 years ago. On top of that, she gets the unexpected news that he had a daughter with her former best friend, who died recently, thus leaving him to raise a teenager all by himself. Should Abby cry him a river now?

Before embarking on her trip to South America, her world is infiltrated by drama, love, and resentment.

Abby is such a cool chick—spunky, brave, and street-smart. Her solo travels are very admirable to me, making me wish I could be more like her. Why else would Trevor want his daughter to be around Abby? She was a strong, fearless woman, one that has been through hard times but carried on. She was a kick-ass role model.

I also liked Kelsey, the smart and creative teen who becomes Abby’s protégé. Again, the idea of wanting to see it all before it’s too late is SO relatable.

Well-written and full of emotion, story is a true testament of what strong women are made of. Women leading women around the globe. How cool!

My rating: 4 stars
Posted by Sandra's Book Reviews at 8:52 AM