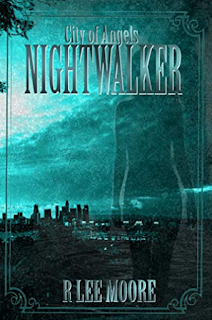 Flavius was a vampire traveling to the City of Angels. Flavius, who had never been good at socializing with other vampires, despised the politics of the Great House and hoped to avoid it all.

“Still, being able to see firsthand how a hundred-fifty year old treaty with humanity had shaped vampire society in the United States was of interest to him.” (2)

“Everywhere else, in spite of whatever power they may have, supernatural beings were often exterminated on discovery. The New World was the only place where vampires, and other supernatural creatures lived openly with their human counterparts.” (2)

Writing was rich and dark, although the dialogue was a bit antiquated. To me, it just seemed like there was more dialogue than action. I was kind of waiting for something to happen. The mingling of these night creatures sounded interesting at first, but the story was just too stagnant for my liking. Perhaps I expected more battle and less debate. I mean, these are vampires, right?

This book definitely had a sophisticated palate with an air of majesty, but I have to say that this was pretty dull for me.

My rating: 2 stars
Posted by Sandra's Book Reviews at 9:23 AM