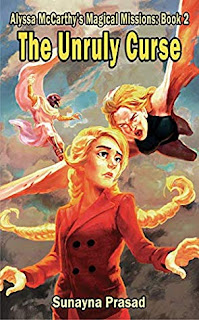 Welcome back to magic.

It’s been six months since Alyssa McCarthy encountered an ounce of wizardry. How could she have done any magic? Could she be in danger again? Ever since she defeated an evil magician, she never wanted to go near the stuff again.  Now she was on a mission to remove her powers.

Alyssa is your typical middle school girl going through the growing pains while also dealing with the magic she doesn’t want. There’s really not much magic happening. Alyssa spends most of her time balling about it actually.

An okay read for YA audiences.

My rating: 3 stars
Posted by Sandra's Book Reviews at 8:37 AM