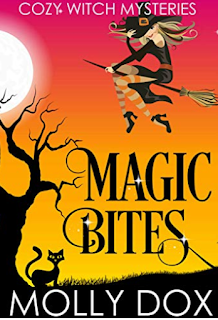 Katy is the owner of The Wickedly Good Sand-Witch Shop, which was housed in the corner of Normal Town and Not-So-Normal Town. Her co-worker is a spirit named Alex that lived in a cookie jar.


On bowling night, the body of Miss Priss—the most hated and cantankerous woman in town—was found dead, and everyone (including Katy and her friend) was a suspect. Murder was one thing, but it was quite another when witches were involved.


Proving her innocence might be tough, especially when you’re married to the Chief of Police, who doubts if you had anything to do with the murder. After all, the lady died eating Katy’s sandwich.


Katy and Eve were both witches, but they were out of practice and can only do small stuff like move things. Time to go back to Witch School.


Meanwhile, the witches do their own investigation as the four close friends seem to turn on each other, doubting their own stories. This made for good drama and tension.


With a gossipy spirit and a secret agent cat, Katy will get to the bottom of this twisted murder case.