Review: THE GIRL IN THE RAIN by L.G. Davis 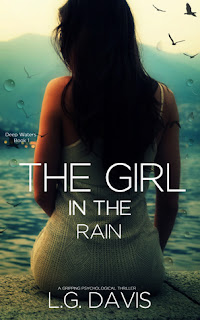 Paige was a teacher. For her, math was the only constant in her life when everything else was in chaos. Having to take care of her alcoholic brother, who lived miserably in a wheelchair, was more than she could bear. But what else could she do? After all, she felt guilty and responsible for him. Her friend has often told her that she had a right to her own freedom, but, still, her brother treated her like a prisoner.


She can’t get rid of him. He wants to make her pay for what she did. Paige was watching over Chucky—this demon child. He just tortures her for fun. The things he does to her. I would’ve so killed him.


“Reality is dark, painful, and filled with nightmares.” (163) Can a woman face her fear and try to get her life back?


Story was dark and gripping, although it lagged in certain areas. What was so surprising is that the story had its fill of “what happened” gaps, leaving the reader befuddled with several questions, many possibilities, and really no answers. What happened to her brother? What happened on her wedding night? I guess that was part of the whole mystery. The story just leaves a bunch of holes.


Overall, this was a well-written piece of work.