Review: SANGRE: THE WRONG SIDE OF TOMORROW by Carlos Colón 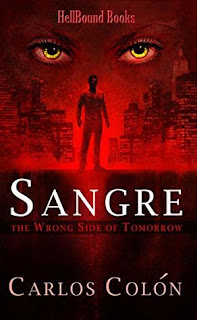 There have been random killings spreading the country. Perhaps it would benefit from the aid of an undead vigilante.

Nicky Negron is back wandering the streets of New York with his crass and delinquent nature, but now he must deal with his tortured soul.

“Any remaining traces of my humanity were to forever be shrouded by the sickening truth that I needed to feed on human blood to survive.” (17)

The character is ridden with angst and disillusion, especially when his mind becomes haunted by the memories of another demon. Was he being possessed? Was he doomed to become a soulless predator like the host?

In his quest, he is plagued by his childhood past and shackled by the insatiable hunger running through his veins. What’s even worse was all the suspicious death surrounding him.

Once again, the author gives us an unconventionally dark tale of torment and triumph. Nicky is a complex character with a spear for justice, a sharp tongue, and a tortured soul. At times, the story becomes disorganized by various plot lines and random characters. It almost felt like too much was happening at once, which was slightly overwhelming and caused a patchy flow. Story definitely carves a new niche to the horror genre with its savory additives of mystery, suspense, and emotion.