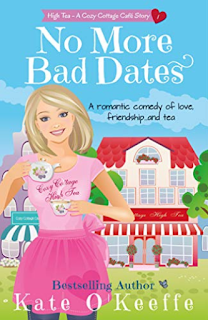 Always a bridesmaid, never a bride. Well, when your boyfriend dumps you at a wedding, that couldn’t be truer for Sophie. What’s worse is that she sees that same boyfriend cuddling up with a random hottie minutes after he dumped her. Oh yeah, this was the worst day of her life alright.


Of course, her friends tell her that there’s plenty of fish in the sea. The problem was that Sophie sucked at choosing men. Then the pact idea comes up. “They called it the ‘Last First Date Pact.’ Basically, they agreed that the next guy they each dated would be The One.” (17)


But rather than focus on the HEA, the girls lean more toward an HFN (Happy For Now)—nothing too serious, nothing too permanent. They agree to only date the good guys. No more jerks, no more creeps, no more bad dates. Hear, hear!


The way this works is that the worthiness will be decided by the others. That’s all fine and dandy, but what about getting the guy’s perspective? That’s when Sophie’s BFF and roommate, Jason, comes in. “Having a guy friend help us understand the “enemy” might give us an advantage.” (26)


Story is a total make-over in the world of dating. Sophie is relatable to any single woman with a wacky family infected with Baby-ness. There were a few lagging areas, but I think the story gets the basic point across. Is it so hard to meet a good guy? Heck yeah! I guess that’s why everyone from crazy relatives to busybody co-workers makes it their mission to match Sophie with one. The thing was that it takes a while for the first date to come up. We were supposed to get a series of bad dates, weren’t we? Instead, this mostly dealt with the relations between family and friends with witty banter and good humor.