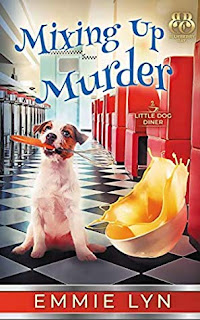 Dani works at Little Dog Diner, which was owned by her grandmother. After the fake funeral to a guy she despises, she and her friend find a dead body in the kitchen. The dead body just happened to belong to the guy that had the fake funeral; he was also Lily’s ex. The murder weapon: Dani’s favorite rolling pin. Needless to say, the two were possible suspects in the murder. But it turns out there were several suspects—people that wanted Ray dead.


This was an okay mystery, but it was kinda slow most of the time. The girls mostly bake—it’s all they seem to do. It started off okay, but I wasn’t overly impressed with it.