Review: THE WATCHER IN THE NIGHT by Michael Carlos Maroney 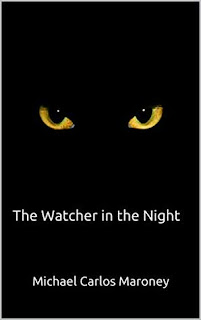 “As they died, they crawled to the nearest shade, to the womb. It was the desire not to die in the open, exposed to the harsh light of day.” (6)

Another meaningless death of a cat. What were the humans up to?

“Yes, if you wanted a suspect who was evil and perverse, a human would usually be your first choice.” (8)

Tobias was a proud member of The Watch Cats—they investigated treaty crimes and brought the guilty to justice.

This was definitely a twist to the traditional killing spree. Who would even bat an eye to the random deaths of stray cats? But, evidently, bodies were springing up more and more.

The story seemed to be almost political in the sense that officials were taking investigative duties and procedures. I’d say it was satirical really, because it was hard to take any of it seriously. By the tone of the cover and summary, I guess I kind of expected a horror similar to the movie, Strays (I’ve always thought cats could be pretty scary.) But reading this made me realize that it wasn’t the case. It wasn’t to my liking.

My rating: 2 stars
Posted by Sandra's Book Reviews at 7:38 AM