Review: TOO MANY ROCK STARS by Candy J. Starr 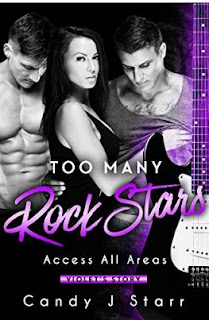 Violet knew rock stars, which is precisely why she always strived to stay away from them, always putting them in their place whenever they got too near. But it’s kind of hard when you’re a band booker for a night club. “If I had one problem in this life, it was too many rock stars.”

For Razer, Violet’s always been the one for him. If she’d just give him a chance, he’d show her how good they’d be together and how well he’d treat her with breakfasts in bed, foot massages, and never ever waking her from her nap. If only she didn’t have this prejudice against rock stars. Then comes Alex, who only wanted to sweet talk the bank booker into a gig until he sees the sensual Violet in her skimpy shorts.

The rivalry. Razer and Alex are like two pit balls aiming for the same target: Violet.

The competition. Razer and Alex are suddenly thrust into a battle of the bands to prove who’s the better rocker. Whoever brings in the biggest crowd wins. The prize? A date with Violet. Oooh!

Story is full of hot and raging testosterone. It was a battle of the alpha males, even though both were sincere and sweet in their own way. The thing about alpha males though is that they can get pretty tiring fast. The entire pissing contest gets old and boring quick. And that’s what happened in this battle for Violet’s heart. There wasn’t really much fight in it though. In fact, most of it lagged considerably with all the banalities of the behind-the-scenes stuff, like advertisements and promos and such.

Razer’s intentions seemed sweet and honorable. I liked Violet’s level-headedness and efficient demeanor. She’s plain and simple, but yet gorgeous and sexy, which is what attracts the guys.

Even though I was bored with most of it, I still wanted to find out who won. I mean, the whole “girl caught between two guys” is an interesting story line. She likes both but doesn’t want to hurt neither one. She wants to choose neither, but someone has to win this competition. But who will win?

And one of the best things about this story is that it didn’t get dirty. Contrary to what the cover may have you believe, there is no ménage à trois .

Overall, this was a simple and clean story. There was a little too much lag, a few too many typos, and the ending wasn’t as climatic as I thought it would be.

My rating: 3 stars
Posted by Sandra's Book Reviews at 7:35 AM