Review: RUNNING FROM A ROCKSTAR by Jami Albright 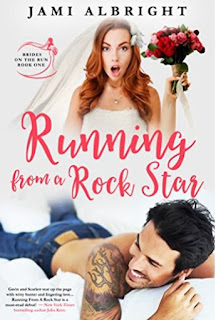 Scarlett, the No-Fun-Nun, has woken up from her wild, one-night stand in Vegas. She was a children’s book author that just had sex with Gavin Bain, famous rock n’ roll star. And if that wasn’t shocking enough, she also realized that she married him in Vegas. Yikes! So she became a Bride on the Run, and it was captured on film all over the media.


He needed to save his bad boy image for his record deal. She needed to spice up her good girl rep and money to help out her father. Could the two stay married and pretend to be in love?


I liked that the characters felt real and endearing. Story was well-written and easily-read, however, it gets a little slow, turning mediocre towards the ends. Life of a husband/wife on a TX farm was not all that stimulating. I mean, an author and a rock star were like oil and water. But I guess this would be an okay romance.