Review: DEATH ON THE STRIP by J.S. Peck 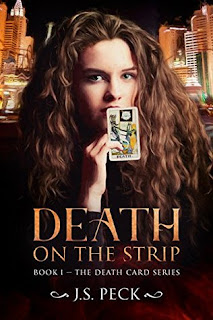 “The idea of going back to reading tarot cards brought back many painful memories.” (LOC 49)


Rosalie never forgave herself for her fiancé’s death. She had seen the death card for him, but thought nothing of it at the time. At her latest client reading, the death card shows up for the former Las Vegas dancer. Later, her body was found on the road by the Vegas strip, and Rosalie decides to investigate. Using her intuition and psychic premonitions, she delves into the seedy underbelly of the streets. In the process, she teams up with a handsome cowboy reporter. Meanwhile, the death card kept falling into place. What did it all mean?


Story was crafty, well-written, and so mysterious. Rosalie researches the case very thoroughly, even though I thought most of what she was found was irrelevant, like Bush’s Scarlett Letter law and the history of the first striptease performer. What was the point of all this Google data? Did we really need a history lesson on strippers?


Overall, this was a pretty good mystery, except the clues did not lead to the outcome of the story. The conclusion had no ties whatsoever to the mystery. We basically got the answer to a totally different case. The original mystery still remained and we must continue the series to find the answer. Murders go unsolved.