Review: THIS 20-SOMETHING LIFE by Jon Rance 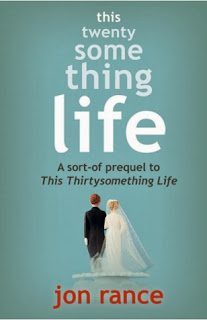 They called this a “prequel (sort of) to The 30-something Life.” What the heck does this mean? Was it a prequel or not? How could it be “sort of” a prequel?


The premise of this so-called “story” was all about a man weeks before the wedding getting the jitters, and he’s writing into this hourly diary, dictating what goes on and how he feels—like he was talking to himself. It was so poorly written that it was like reading the rambling unfinished thoughts of a ranting lunatic. Man, the dude sounded like a chick! Case in point: “Make a mental note to ask Emily about my performance in the bedroom without actually asking her about it. Is that too needy?” (82) Yes!


It also had all these weird British vocabulary. What’s a “naff”?


This was basically the male version of Bridget Jone’s Diary, and I wasn’t into that movie either. In fact, I could barely take tiny snippets of it before giving up on it.

Posted by Sandra's Book Reviews at 9:17 AM