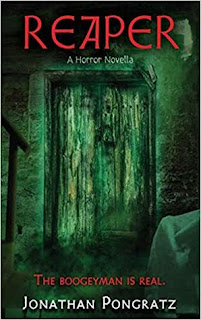 It’s Halloween, and Gregory along with his little sister, Imogen, was free of parental supervision. At 13, he was finally man of the house.  Having to deal with his bratty, whiny sister was tough…until she mysteriously disappears. Was she playing hide-and-seek? Where could she have gone?

Then he notices the door to the basement was open. But that door was always locked. With a sinking feeling, Greg enters the bleak and dark corridor, heart pounding in his chest. What was that noise? Footsteps? Monsters? But, wait, monsters don’t exist…do they?

Weeks later, Greg is still baffled by the night his sister was taken from him. What was that hideous creature? And why won’t anyone believe his story? There had to be a way to bring her back. An interesting discovery was when he finds out a kid has gone missing every year around Halloween.

I enjoyed this book, which was a combination of Goosebump and Stephen King books. Greg was certainly an inquisitive and tenacious kid. He wouldn’t stop until he had answers. Story had horror, adventure, and mystery all rolled into one.

An interesting and scary tale—just the perfect Halloween treat.

My rating: 4 stars
Posted by Sandra's Book Reviews at 9:05 AM