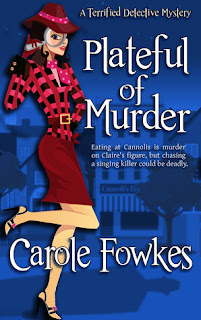 As a girl, rather than play with dolls, Claire played “get the crook,” always believing that justice should prevail and the good guys should win. That’s why she became a detective.

What started off as merely taking incriminating shots of sleazebag cheats soon becomes too much to bear when murder gets involved. But the desire for justice and desperate need for money provokes her to pursue the case, even though she has no idea what she’s doing. No question that Claire was scared, which is why this book is part of the Terrified Detective series. She has fears—fear of going blind with too much hair spray, fear of not paying her debts, fear of getting big hips like her aunt, fear of getting killed on an investigation she has no business in.

I liked Claire’s witty side, especially with her metaphors. For example, “the case was like a puzzle, where you had the border pieces only but none of the inside ones, which made it impossible to make out the picture.”

Story was simple and witty, but it lagged sometimes and there were too many characters. What could be so interesting about investigating a pharmaceutical company? And the worst part was that even though Claire was an expert at crime shows and has wanted to catch the criminals since she was a kid, she was not a good sleuth. She had no experience, no clue, and no way to protect herself. Still, the book had charm, but the case wasn’t what I thought it would be. It just wasn’t what I was expecting.