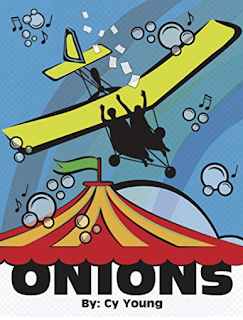 Onions has just been sent to his 16th foster home, Despondent, he steals the purse of Sandrine, a retired circus performer. Instead of turning him in to the police, Sandrine enlists the boy in her fight against City Hall. In the process, Onions learns the importance of reading, having a worthwhile life-goal, and how to play the trumpet, his ultimate redemption. Sandrine is a strong role-model for pre-teens through 18-year-olds as she helps Charles Wesley Onions find meaning in life. A tragic event leads to the powerful, uplifting, and inspiring ending. Finally, Onions is a modern-day Holden Caulfield .. without the swearing.

Review: "Charles Wesley Onions hated everything. He hated his father for dying...and leaving him alone with his alcoholic mother. He hated his mother for sending him off to a foster home. He hated...the 15 other foster parents who abused him and made him work before and after school. But most of all, [Onions] hated himself." (LOC 72)


The boy had a wild-eyed charm and witty naiveté. He was a boy that was into comic books, because good always triumphed over evil. Like the heroes he reads about, he was a young fighter, but he had a firm grasp of reality.


Onions then develops a mentorship with Sandrine, a former circus performer, who opens up his world to literature, music, knowledge, and morality.  "Unenlightened, uninformed people usually haven't learned to discipline their minds." (65) Sandrine teaches the boy a simple equation to life: Read to gain knowledge, then learn to store the knowledge and use it when the time comes. After all, the mind is a precious thing, to fill with great ideas and beautiful thoughts. "You can be a bum or a great man." (68)


I liked the "knowledge is power" mantra and how it pushed Onions to do more for himself. It's definitely a great message for kids. The historical and dated facts were daunting at times and didn't quite correlate with the main coming-of-age tale that became so inspiring. In fact, these segments almost deviated from the story of Onions, especially when the focus turned on the mayor and the councilman. I understood that the boy got involved in the battle of politics, but it just seemed to tarnish the flourishing development of the young boy. I think it made it too serious and not that fitting for a middle-grade audience.


I though the book had a fun-looking cover. It blended a child-like quality with a precocious sense of adventure, however, I'm not sure if it was quite fitting for the academic and political views within the story.


All in all, this was a nice story of a poor boy that grew his mind. I honestly would've taken out the political aspect and focused more on the learning development. But I think his story is a great testimony of what learning can do.