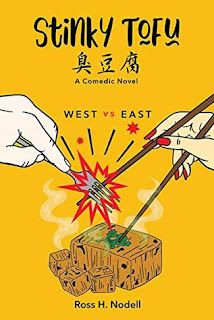 Sam Lowe was your average, working Joe with a good lease on life. Although never in a rush, his search for the "nice Jewish girl" continued on, even if only to please his Jewish parents. Sadly, he never quite made it down the aisle...or even on a second date for that matter.
After realizing that he was being used as "a pawn in their underhanded game of corporate politics"  and is jetted off to schmooze and bring home the bacon, fate brings him Linda Liu, a stunning Asian beauty. (32) How could he think that this was the woman for him when she barely spoke any English?

Nonetheless, he soon pops the question to her and she gladly accepts...however, there was one small caveat: "No have mother’s approval, no can marry." (64) So off to Taiwan he goes, to a far-away place several time zones away, where he was deemed the "white devil."

Story carried a refreshing voice full of cleverness and wit. Readers will chuckle at his little anecdotes. There was a little lag here and there, and I thought that he explained rather too much at times, filling your head with loads of trivia and history; but, luckily,  it doesn't drag for long and quickly picks up once he gets to the "stinky tofu" of his journey. Throughout his adventure, Sam finds fault with his assimilation; he struggles to get by on the Chinglish; and he must eat chicken feet, thousand-year old eggs, and, of course, the rotting, smelling tofu dish. Yum!

It was such a wild and zany clash of cultures. I especially enjoyed the character's comparison between the Asian and American cultures, how he breaks down stereotypes and finds a grain of truth and humor in all of it.

Readers will enjoy the tests and trials of this "goofy American." This book is a hoot!

Posted by Sandra's Book Reviews at 7:58 AM