Review: COFFEE, TEA, OR ME by Rich Amooi 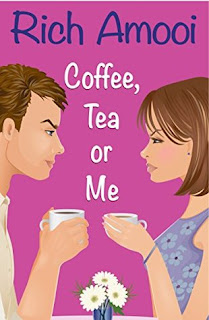 Jack had the most successful coffee shop in Northern California...until Susie's tea shop moved next door. Tea and coffee were two different beasts, so they couldn't possibly compete...could they?

Susie's opening day turned Jack's place into a ghost town. That was just unacceptable to him. So what if she was attractive and had the best scones he'd ever tasted. He couldn't very well allow her to ruin his business as well as his opportunity to franchise. The first thing he does is report her electrical violation to the city. Report it by mail? Who mails anything nowadays? A promotion for coffee-flavored tea? Oh, she was playing hard-ball alright.

The whole thing turns into a giant, humorous war between the two; however, the chemistry between them is clearly noticed. The two were light-hearted, sensitive, and sincere―a match made in heaven.

Story was funny and witty. Another good one from the King of Romantic Comedy.

Posted by Sandra's Book Reviews at 8:34 AM